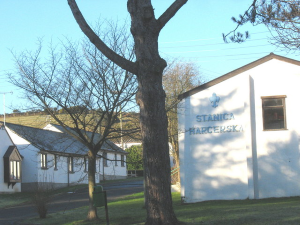 Proposals to redevelop an entire village in Gwynedd have been submitted to planners, as Penrhos Polish Village in Pwllheli, founded by the Polish Housing Society after WW2, could face demolition.

Proposals to redevelop an entire village in Gwynedd have now been submitted to planners. Penrhos Polish Village in Pwllheli was founded by the Polish Housing Society after World War Two.

There were around 100 exiled airmen, soldiers and sailors living there. They established a Polish-speaking community on the former RAF Penrhos base, which soon grew in numbers.

The original and current Polish village facilities include a church, library ,a large communal dining hall, a shop and allotments. A care home for veterans was also established on the site, but this was closed in 2020 when the housing group ClwydAlyn took possession of the site.

Now the ClwydAlyn has submitted plans via Cadnant Planning to transform the entire site with a massive demolition and rebuild project. A statement from Cadnant Planning said: “The proposal includes the demolition of 103 residential dwellings, three blocks used as four self-contained visitor accommodation units, nursing home, Scouts’ dormitories, hall and workshop, library/hall building, offices and garages and the erection of 107 residential units.”….

Work would take place in three stages. The site currently accommodates those over 55 years of age with strong links to those from the Polish community as well as people from the local area.