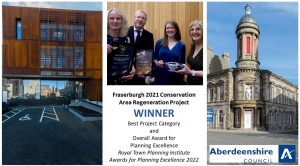 The landmark regeneration scheme in Fraserburgh, Aberdeenshire – which helped close IHBC’s 2022 Aberdeen Day School at #IHBCAberdeen2022 – has just been crowned the overall winner at the inaugural RTPI Scotland Awards for Planning Excellence.

‘It is a real showcase of how ‘heritage’ can drive economic change in a place that few saw as heritage, and won against tremendous competition from Dundee, Edinburgh and more.’

‘The project has developed community confidence, civic pride and economic recovery, creating a legacy that will continue into the future.  As such, it was the most fitting of subjects for the ‘Regeneration’ session of our Aberdeen School!’.

A landmark regeneration scheme in Fraserburgh has been crowned the overall winner at the inaugural RTPI Scotland Awards for Planning Excellence 2022.

The Fraserburgh 2021 Conservation Area Renewal Scheme Townscape Heritage Project won in the RTPI Scotland Best Project category and took away the overall award for Planning Excellence at the ceremony in Edinburgh on June 16.

Aberdeenshire Council picked up its award with an innovative heritage-led regeneration scheme. The approach used the built heritage of the town as a means to catalyse, not constrain, the economic development and economic growth of the area.

Led by Aberdeenshire Council’s Planning and Economy Service, the project’s latest success comes just a few months after the Fraserburgh regeneration programme was hailed the ‘Most Improved Place in Scotland’ in the 2021 SURF Awards.

Fraserburgh 2021 has targeted properties in the town’s Conservation Area which were derelict, vacant or both, to bring them back into active use, featuring shopfront improvements, reinstatement of original architectural detail, public realm and an extensive training and engagement programme.

Created with the aim of transforming the image and quality of the commercial core of Fraserburgh by investing in the unique built and cultural heritage, the project began in 2015 and will be complete in July 2022.

It has utilised the qualities of Fraserburgh’s built and cultural heritage to help improve the economic success and vibrancy of the Broch’s town centre by creating buildings, spaces and places which capitalise on civic pride, local identity, local connection and a sense of place.

Boosting enterprise in the town centre was one of our core aims and following the complete refurbishment of the Faithlie Centre this now houses an Enterprise Hub, a space were entrepreneurs and start-ups can access office space and advice.

Since its inception the Hub has attracted around 235 users including pre-starts and existing businesses and 61 new full time and part time businesses have started in a range sector including retail, service, professional, trades, crafts/artisan makers, hospitality, and tourism.

The scheme has seen properties benefiting from a variety of repair, restoration, complete shopfront replacement and the installation of individually designed and hand painted signage.

The John Trail Project taken forward by the North-East Scotland Preservation Trust has seen comprehensive works to repair and renovate existing derelict buildings to create a bespoke 11-bedroom boutique hotel. Although not part of the Fraserburgh 2021 project, this resulted in the adjacent former Clydesdale Building also being purchased by NESPT to expand the scale of the hotel offering.

Cllr Doreen Mair, chair of the council’s Banff and Buchan Area Committee, said: ‘These awards were achieved through lots of hard work and dedication by so many. The judges were impressed with the collaborative way a number of council services, organisations, local groups, contractors, property owners and councillors had worked so well together to improve the town.

‘It demonstrates what can be achieved when we all work together and we look forward to progressing further regeneration schemes in the town and we will thrive and grow if we continue to support each other and get involved.’

Commenting on the continuing awards success, Paul Macari, Head of Planning and Economy at Aberdeenshire Council, said: ‘I would like to congratulate all those who have played such an important role in the Fraserburgh 2021 project during the past seven years.

‘This multi-agency partnership, led by Aberdeenshire Council, has been truly transformative and been gratefully funded by the likes of Historic Environment Scotland, National Lottery Heritage Fund, Regeneration Capital Grant Fund and the Scottish Town Centre Fund.

‘It clearly demonstrates how our Planning Service can facilitate and lead multiple agencies with the same core aim – the regeneration of place – and I am confident Fraserburgh and indeed other North-east towns will build on this success and continue to put our wonderful facilities and landmarks on the map for many years to come.’

Craig McLaren, chair of the RTIP judging panel, added: ‘Conservation and historic buildings are often seen a constraint on development and economic growth. The judges were extremely impressed with the way this project ‘flipped’ that idea to become a key asset for the reinvention of the town.

‘Fraserburgh has not always been seen as a ‘pretty’place, and the changes that have been delivered are welcomed and significant. Planning and investment in the historic fabric were seen as catalysts to focus on a few key sites whilst delivering training and establishing an enterprise hub. The judges saw how they were already making a remarkable difference to the town and its people and the belief in its future.’

The RTPI Scotland Awards for Planning Excellence celebrates outstanding plans, projects and people that demonstrate the power of planning. Other winners on the night included Planner Rhiannon Moore of Montagu Evens who scooped the prize for Young Planner of the Year, and planning consultancy Kevin Murray Associates, who won Small Planning Consultancy of the Year. Jacobs were awarded the top accolade for their Edinburgh City Centre Transformation Programme in the Plan-Making category.

A landmark regeneration scheme in Fraserburgh, Aberdeenshire has been crowned the overall winner at the inaugural RTPI Scotland Awards for Planning Excellence 2022.

The Fraserburgh Conservation Area Renewal Scheme Townscape Heritage Project won in the RTPI Scotland Best Project category and and took away the overall Award for Planning Excellence at the ceremony in Edinburgh on 16 June.

Aberdeenshire council picked up their award with an innovative heritage led regeneration scheme approach which used the built heritage of the town as a means to catalyse, not constrain, the economic development and economic growth of the area. The scheme has targeted numerous derelict/and or vacant properties in the Fraserburgh Conservation Area bringing them back into active use. This included shopfront improvements, reinstatement of original architectural detail, public realm and an extensive training and engagement programme.

The RTPI Scotland Awards for Planning Excellence celebrate outstanding plans, projects and people that demonstrate the power of planning.

See more on the School: