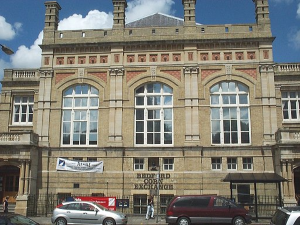 Bedford Corn Exchange has been listed at Grade II (GII) by the Department for Digital, Culture, Media and Sport (DCMS) on the advice of Historic England, reports The Bedford Independent.

… Glenn Miller played his last concert at the Corn Exchange in August 1944, before he disappeared…

…. Dating from 1874, Bedford Corn Exchange is described as “an elegant Victorian public building, enriched with classical detailing and architectural features, including an ornate ceiling with three glass domes.”

During the Second World War, the Music and Religious Departments of the BBC secretly decamped to Bedford when it became too dangerous for them to be based in London or at their wartime home, Bristol.

Around 400 musicians, staff and engineers moved to the town, and many buildings – including Bedford Corn Exchange – were used as studios, offices and lodgings.

The BBC Symphony Orchestra used the venue between September 1941 and July 1945 for public concerts, which were broadcast to the nation. The Corn Exchange was also used as an Armed Forces Canteen.

The BBC Proms came to Bedford in 1944, and the Golden Jubilee Concert was held at the Corn Exchange, celebrating 50 years of the Proms.

Perhaps most famously, Captain Glenn Miller and the American Band of the Supreme Allied Command gave their first broadcast in Great Britain from the Corn Exchange in July 1944.

Glenn Miller played his last concert at the Corn Exchange in August 1944, before he disappeared, later that year, in an aircraft somewhere over the Channel. He is commemorated with a sculptural bust by Patricia Finch, placed on the front elevation of the Corn Exchange in 1994.

As part of the Bedford High Street Heritage Action Zone (HSHAZ), delivered by Historic England and Bedford Borough Council, Historic England is reviewing and researching the historic buildings within the HSHAZ area…

“Thank you to Historic England for the formal recommendation to Government.”