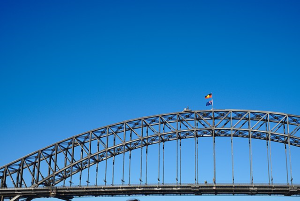 Plans to erect a new flagpole on Sydney Harbour Bridge have been abandoned after a backlash over the £14 million cost and two-year timetable.

image: for illustration only – By Mary and Andrew – Flickr Photos (https://tinyurl.com/8x7ad2uc) Commons Wiwimedia

The government of New South Wales (NSW) had announced earlier this year that it would add a new flagpole to the Australian landmark in order to fly the Aboriginal flag.

Campaigners had been calling for the Aboriginal flag to be flown for five years – but were appalled at the $25 million AUD price tag, the BBC reports.

The state government has now said it will instead fly the Aboriginal flag from an existing flag pole and spend the money on initiatives targeting inequality among Aboriginal and Torres Strait Islander people.

The bridge previously flew the flags of Australia and NSW, with the Aboriginal flag taking the place of NSW on special occasions. It will now permanently fly the Australian and Aboriginal flags.