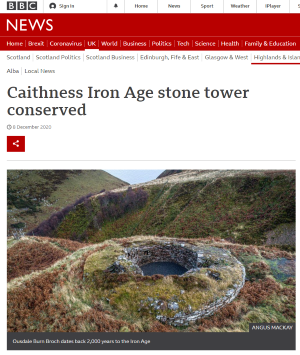 Conservation work has been completed on an Iron Age drystone tower that was damaged by Victorian archaeologists.

The ruins of Ousdale Burn Broch, north of Helmsdale in Caithness, had fallen into further disrepair over the past 130 years.

A wall near the entrance to the broch had collapsed and a tree was growing inside the structure.

Conservation work was delayed by the Covid pandemic and by a caravan being dumped by fly-tippers at the site.

It is thought they were used as dwellings, perhaps for local chieftains. Caithness is home to about 200 brochs.

Ousdale broch was once been described as one of the best preserved brochs in Caithness….

…Caithness Broch Project, secured £180,000 of funding for the work.

The project’s Kenneth McElroy said Ousdale broch had been in a “sorry state”.

He said: “We thought within a few years it might be lost forever.”