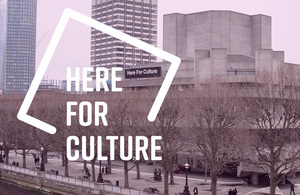 £165 million is being offered to organisations including the National Theatre, Southbank Centre, English National Opera and Royal Shakespeare Company, as support in the form of major loans from the Culture Recovery Fund.

Plans for allocating the remainder of the £1.57 billion Culture Recovery Fund are also being announced today which will help organisations look to the future. Funding, which was held back in previous rounds to allow the Government to respond to the changing public health picture, will be available for organisations who are at imminent risk of collapse before the end of this Financial Year. £300 million in grants and £100 million in loans will also be available to support organisations’ transition back to usual operating mode from April 2021. Further detail on the rounds will be released in due course.

The £165 million loans have been offered to 11 nationally and internationally significant organisations that demonstrated opportunities to engage local communities through education and outreach programmes.

The organisations receiving loans provide work for more than 9,000 people, taking the total number of jobs supported by the CRF to more than 75,000, with many more freelancers and jobs in vital supply chain industries also benefitting, as part of the government’s Plan for Jobs to support, protect and create jobs across the UK.

Bespoke loans have been tailored for cultural institutions with an initial repayment holiday of up to four years, low interest rate and up to 20-year repayment term to ensure they are affordable for arts and heritage organisations.

The funding will help world-renowned organisations like the Royal Shakespeare Company (RSC) which has been producing fresh interpretations of Shakespeare and his contemporaries, and championing the work of new playwrights for a global audiences for more than sixty years, as well as working with young people across the country through its education programmes.

The RSC’s loan of £19,400,000 will enable the company to look to reopen full-scale productions in Stratford-upon-Avon and London in Spring 2021. It will also enable the RSC to continue its national education and partnership activity and ensure the company can revisit previous touring plans.

The security of the repayable finance will also help protect organisations – like the National Theatre – as they restart performances and programmes, providing work for staff and freelancers in the run-up to Christmas.

The National Theatre will benefit from £19,700,000 of support as it reopens, helping the venue return to a more financially sustainable footing. The National Theatre, which led digital innovation during lockdown to make some of their most famous productions available for free, is reopening with a pantomime for socially distanced audiences as well as filming a new version of Romeo and Juliet for TV starring Jessie Buckley and Josh O’Connor. Earlier this week, the Culture Secretary visited to see its final preparations for Dick Whittington which begins performances today and will be available for families to stream online for free over Christmas.

“This government promised it would be here for culture and today’s announcement is proof we’ve kept our word.

“The £1 billion invested so far through the Culture Recovery Fund has protected tens of thousands of jobs at cultural organisations across the UK, with more support still to come through a second round of applications.

“Today we’re extending a huge helping hand to the crown jewels of UK culture – so that they can continue to inspire future generations all around the world….”

Capital Funding to venues across England

As part of the Culture Recovery Fund, £60 million in grants is being delivered through the Capital Kickstart Fund. This will accelerate previously-funded projects that will revitalise core assets in local communities and provide opportunities for work across a range of sectors.

Further investment for capital projects impacted by the pandemic has also been awarded to 74 arts organisations of all sizes, continuing the government’s investment in cultural infrastructure across the country. To date, more than £107 million in capital grant funding has been awarded to 260 projects across arts and heritage sectors, with more than three quarters based outside of London, stimulating the wider supply chain across the country and providing opportunities for skilled construction workers and conservation experts to work on specialist heritage renovations and cutting-edge cultural projects.

Recipients include the Turner Contemporary in Margate which has been awarded £264,000 to complete a long-term transformation of its visitor facilities and digital infrastructure as well as improving the environmental sustainability of the site. The gallery has been a catalyst for the social and economic regeneration of the area and the funding will help the gallery look to reopen in early 2021 to minimise the impact of continued closure on the local community.

The Factory will receive £21,000,000 in capital investment towards the completion of the project to create a world-class cultural space in the heart of Manchester. As well as providing a multi-use space for diverse arts activity, the state-of-the-art venue will be the permanent home for the ambitious year-round creative programme of Manchester International Festival which attracts visitors to the city from across the country and creates opportunities for creative freelancers.

Nottingham’s Broadway will receive £144,000 to refurbish vital visitor spaces whilst reducing the centre’s energy usage to create a more environmentally sustainable future to the regional film hub. The project was due to be completed by September 2020, and this funding will ensure the plans can be completed quickly and safely to reopen and welcome back audiences.

Alexandra Palace has also been announced as the latest recipient of grant funding through the Culture Recovery Fund for Heritage, distributed on behalf of the Department for Digital, Culture, Media and Sport by the National Lottery Heritage Fund and Historic England. £2,967,600 will allow one of the capital’s leading multi-use cultural venues to continue with a diverse programme of live, covid-secure events this winter by covering increased essential costs and supplementing income.

The financing announced today takes the total allocated from the Culture Recovery Fund over £1 billion, delivering on the government’s commitment to be here for culture in every corner of the country during this pandemic.

Devolved Administrations received £188 million through the Barnett Formula to ensure the Culture Recovery Fund has a fundamental and far-reaching impact across all four nations. Northern Ireland has allocated £29 million to a Covid-19 Culture, Languages, Arts and Heritage Support Programme, and over £5 million to a Heritage Recovery Fund. Wales has established a £63.7 million Cultural Recovery Fund which includes £20 million to support music, dance, theatre, literature, and the arts allocated by Arts Council Wales. Scotland’s £59 million funding package has also supported the arts, heritage, and grassroots music and established a £15 million Culture Organisations and Venues Recovery Fund.

In England, more than £500 million in grants up to £3 million have been awarded to over 3,000 museums, music venues, independent cinemas, circuses, heritage sites and theatres across the country. Nearly 70% of funding has been awarded to recipients outside of London.

Nearly £100 million in additional Grant in Aid has been allocated to national museums, and other Arm’s Length Bodies including the British Library, British Film Institute, Churches Conservation Trust and English Heritage.