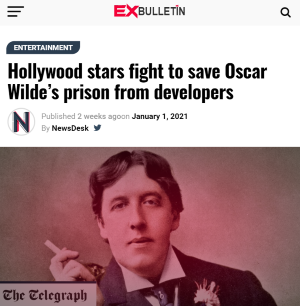 Hollywood actors Sir Kenneth Branagh and Dame Judi Dench are among those campaigning to transform Reading’s former jail – which housed Oscar Wilde between 1895 and 1897, but has been derelict since 2013, before it was put up for sale by the government – into a centre for culture and arts.

[Dame Judi said]… It would be a great gift…

… Robert Buckland, the Justice Secretary, stressed the need to get ‘value for money for the taxpayer’…

Dame Judi said: “It is vitally important that Reading Gaol, a place of such culture, be used in a way that pays homage to its artistic history, namely, to become a cultural and artistic center. It would be a great gift not only for Read as a growing city and population center in the South, but also in the UK and around the world. “

Sir Kenneth, who grew up in Reading, said: “In Oscar Wilde’s iconic poem he says,“ Every man kills what he loves. ”Despite the undoubted challenges, don’t let this wounded beast a building be killed when it can. be healed. “

Robert Buckland, the Justice Secretary, stressed the need to get “value for money for the taxpayer”, but a sale to a real estate developer who wanted to turn the building into apartments failed this summer and the council local is in talks with the MoJ to preserve it for the public.

Toby Davies, Rabble’s artistic director, said: “We have an extraordinary opportunity of poetic justice for Wilde by putting his pieces in the prison where this terrible thing happened to him. It would also give us a chance to show that there is has more to Reading than a shopping center and a train station. “

Game of Thrones star Natalie Dormer of Reading said there was a “huge opportunity to create a cultural gem” in the disused building, while Mr Fry said plans for a center artistic would be a “perfect” legacy for Wilde.

For more background see the NewsBlogs and BBC News