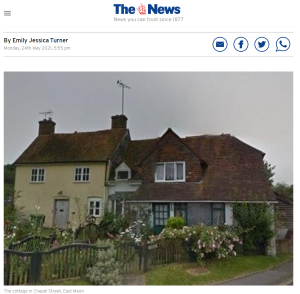 A developer has been prosecuted and ordered to pay thousands in fines and costs after a historic cottage was demolished, reports The News.

… harm caused by the demolition …. is clear and significant…

The brick-built cottage at 2-3 Chapel Street, East Meon, dating back to the late 1800s, was flattened by Mark Probyn of Coombe Road.

It was protected from demolition as part of a Conservation Area, but was brought down by Probyn on March 12, 2020, who was advised that it had structural issues.

EHDC’s planning enforcement officers carried out an investigation, which continued throughout the coronavirus lockdown, and brought the case to court.

Cllr Ingrid Thomas, EHDC portfolio holder for neighbourhood quality, said: ‘The harm caused by the demolition of this beautiful building is clear and significant.

‘It is in a prominent place in the centre of the village and the impact it has had on the character of the area is significant.

‘Charming properties like this one are part of what makes East Meon so special, and we will fight to make sure they are respected and preserved.

‘It is very sad that this historic building has now gone forever and, although it will be replaced, it cannot be recreated.

‘EHDC has a duty to protect our built heritage and we will prosecute breaches of planning law where they arise.’