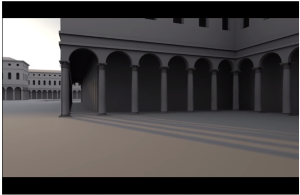 The roots of the discipline we call urbanism run all the way back to the 15th century when, early in the European Renaissance, thinkers were reconsidering a host of conditions taken for granted in the medieval period, but few figures thought as far ahead, or across as many fields as Leonardo da Vinci.

… thinkers were reconsidering….man’s place in the universe….the disposal of his garbage…

Le Corbusier, Frank Lloyd Wright, Ray Bradbury: they and other 20th-century notables all gave serious thought to the ideal city, what it would include and what it would exclude. To that extent we could describe them, in 21st-century parlance, as urbanists. But the roots of the discipline — or area of research, or profession, or obsession — we call urbanism run all the way back to the 15th century. At that time, early in the European Renaissance, thinkers were reconsidering a host of conditions taken for granted in the medieval period, from man’s place in the universe (and indeed the universe itself) to the disposal of his garbage. Few of these figures thought as far ahead, or across as many fields as Leonardo da Vinci.

In addition to his accomplishments in art, science, engineering, and architecture, the quintessential ‘Renaissance man’ also tried his hand at urbanism. More specifically, he included in his notebooks designs for what he saw as an ideal city. ‘Leonardo was 30 when he moved to Milan in around 1482,’ writes Engineering and Technology‘s Hilary Clarke. ‘The city he found was a crowded medieval warren of buildings, with no sanitation. Soon after the young painter had arrived, it was hit by an outbreak of the bubonic plague that killed 50,000 people — more than a third of the city’s population at the time.’ This could well have prompted him to draw up his plan, which dates between 1487 and 1490, for a cleaner and more efficient urban environment.

While it wouldn’t have been particularly hard to envision a less dirty and disordered setting than the late medieval European city, Leonardo, true to form, performed a thoroughgoing act of reimagination. ‘Drawing on the knowledge he had gained from studying Milan’s canals, Leonardo wanted to use water to connect the city like a circulatory system,’ writes Clarke, who adds that Leonardo was also studying human anatomy at the time. ‘His ideal town-planning principle was to have a multi-tiered city, which also included an underground waterway to flush away effluent.’ The top tier would have all the houses, squares and other public buildings; ‘the bottom tier was for the poor, goods and traffic — horses and carts — and ran on the same level as the canals and basins, so wagons could be easily offloaded.’

Though its ambition would have seemed fantastical in the 15th century, Leonardo’s city plan everywhere marshals his considerable engineering knowledge to address practical problems. He had a real location in mind — along the Ticino River, which runs through modern-day Italy and Switzerland — and planned details right down to the spiral staircases in every building. He insisted on spirals… ‘because they lacked corners, making it harder for men to urinate,’ but they also add an elegance to his vision of the vertical city, a notion that strikes us as obvious today but was unknown then. Of course, Leonardo was a man ahead of his time, and the 3D-rendered and physical models of his ideal city in these videos from the Ideal Spaces Working Group and Italy’s Museo Nazionale della Scienza e della Tecnologia Leonardo da Vinci make one wonder if his plan wouldn’t look both alluring and impossibly radical to urbanists even today.