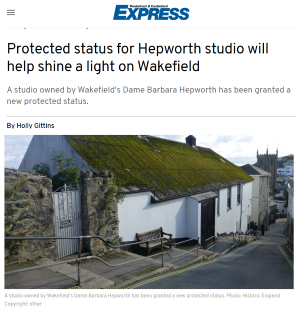 A studio owned by Wakefield’s Dame Barbara Hepworth has been granted a new protected status.

The  Pontefract and Castleford Express writes:

The former cinema and dance hall in St Ives, Cornwall, was where Dame Barbara Hepworth worked on some of her most prestigious pieces, and has now been granted Grade II listed status by the Department for Digital, Culture, Media and Sport on the advice of Historic England.

The Palais de Danse has remained with Hepworth’s family since her death in 1975, though work benches, tools and prototypes from the studio are currently on display at The Hepworth Wakefield.

And the new recognition for the building, granted 45 years after Hepworth’s death, will also help to shine a light on her home city.

Simon Wallis, director of The Hepworth Wakefield, said: “It has huge significance because it was a major studio space for Hepworth, it was one of the biggest places she could find in St Ives.

“A lot of people associate St Ives with Barbara Hepworth. It’s saving a major bit of our artistic heritage.

“But if you want the full story you’ve got to come to Wakefield too. She was as influenced as the landscape around us here as she was Cornwall.

“She’s one of the most important artists of the 20th century and it’s very important for Wakefield the city and the district moving forward that we concentrate on the importance of sculpture.”

Dame Barbara Hepworth, widely considered one of the most important sculptors of the 20th century, was born and raised in Wakefield.

In 1939 she moved to Cornwall with her husband, where she purchased the Palais de Danse as a studio location.

A museum in her name was opened in her home city in 2011, and now draws more than a million visitors a year.

Like all other museums, The Hepworth Wakefield is currently closed as part of the UK lockdown.

But Simon believes that the district’s heritage as the birth place of Barbara Hepworth and fellow sculptor Henry Moore will play an important part in helping the economy recover.

“Post-virus people are going to really need to concentrate on UK-based tourism,” he said. “There are some wonderful things in our district and I think the legacy of both Barbara Hepworth and Henry Moore has a really important selling point for Wakefield.

“Wakefield is near Leeds, but if that’s all we can say, you’re not saying much. The Hepworth is a success story for the city.

“There’s a lot more here than people care to recognise and it does look like people are beginning to think about that.”