‘It isn’t safe to walk’: how would young people plan UK streets? 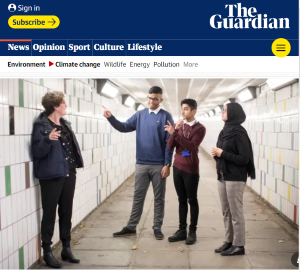 A radical project in east London is putting children and young people at the heart of the debate over liveable communities.

A group of sixth formers are talking about street play, hide-and-seek and football – and about how cars impact the way they use local spaces.

“I have good memories of playing out,” says 17-year-old Sajidul Islam. “Big games of football with all my friends.” He thinks young people should be asked more often what they like about their neighbourhoods. “But I think they prefer to ask people with degrees.”

His classmate Ahona Zaman describes her journey to school, walking through a dark underpass beneath a dual carriageway. “I love cycling but it’s too dangerous.”

… a collaboration with architect Dinah Bornat that aims to bring the voices of young people into the planning process.

Bornat is a mayor’s design advocate to mayor of London and an advocate of child-friendly design. She is here at the invitation of the local housing association, Poplar Harca, and developers at the outset of a regeneration plan for the local area, including 1,000 new homes on the nearby Aberfeldy estate. Underpinning her work, which is based on years of speaking to children about their neighbourhoods, is the belief that streets designed with young people in mind will put pedestrians firmly above car users.

Her youth-led approach is a growing influence on developers and architects, and she has just helped create a free to use youth engagement toolkit, Voice, Opportunity, Power. She hopes it will be part of a revolution, encouraging developers and community groups to give young people a voice in the debates taking place all over the country about issues such as low-traffic neighbourhoods.

In a survey for the project 89% of 16- to 18-year-olds said they had never been asked their opinion about changes in their neighbourhood….

Thom Palser runs the Spotlight youth project attached to the school and grew up here. He wants developers to use spaces like his to link up with young people. “When they open up and say what they really think they have so much to say. These young people care about their whole community, they see themselves as part of the wider East End.”…

Bornat is optimistic about the growing willingness in the industry to listen to young people. “I am getting calls from leading architects and developers, local authorities, housing associations … when I speak to them they are excited about this approach. They get it, if you listen to young people you end up with better places to live.”