IHBC features ‘Heritage from the doorstep’: The drama as Wrexham police station disappears from the town’s skyline 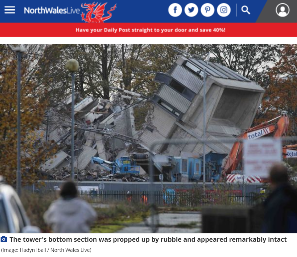 Wrexham’s landmark police station building was brought down with explosives recently, after dominating the town’s skyline for more than 45 years, reports The Daily Post.

..a monument to brutalism…

Wrexham’s landmark police station tower has been demolished after dominating the town’s skyline for more than 45 years.

The building was brought down with explosives on Sunday morning to make way for a Lidl supermarket and coffee drive-thru.

“Now we can begin the job of crushing and recycling the material on the ground.”…

A crowd of 80 to 100 people gathered at the former Groves School site to watch the building come tumbling down at just after 8.30am….

“The explosion brought down the building to a level where our ground machinery can get to work dismantling the remaining structure,” said Mr Nicolas.

“Rubble will be processed and crushed on site.

“The resulting material will be re-used on the site for the new building, or it may be carried away for use on road building or other projects.”

In many ways it was an impressive structure – a monument to brutalism – and at one time it was considered for protection by Cadw.

However the heritage authority later decided the place was not worthy of being listed for its architectural or historical merit.

The police station was once named the ugliest in Britain – but it had become part of Wrexham’s skyline and not many people believe a supermarket will be much of an improvement.

This was reflected in a snap poll conducted by North Wales Live today which revealed divided loyalties: while 55% were prepared to bid good riddance, the rest were sad to see the building go and felt it could have been repurposed.

The 10-week demolition project is being filmed by the Discovery Channel for a programme due to be screened early next summer.