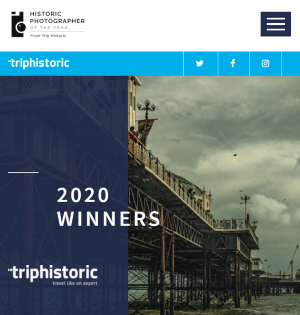 The Historic Photographer of the Year awards showcase the world’s very best historic places and cultural sites from across the globe and 2020’s Awards called on photographers to scour their photographic archive and share their most astonishing imagery of those places which dominate our past.

… Historic England is once again proud to be a partner…

The Overall Winner was awarded to Michael Marsh for his transfixing capture of the Grade II-listed, Brighton Palace Pier. The Historic England category was won by Adam Burton’s aerial view of St Michael’s Church on Somerset’s Burrow Mump, while the newly-launched Where History Happened category run in partnership with television channel Sky HISTORY went to Martin Chamberlain for his sombre shot of the ancient city of Palmyra, captured before the destruction wrought by Syria’s civil war.

Commenting on the Awards, judge Dan Snow said: “Historic Photographer of the Year shines a light on the fascinating beauty of the world’s historical sites. These cultural monuments stand as testament to the incredible stories that took place all around us. The call for photographers to comb through their archives saw everything from abandoned urban landscapes and utterly transporting shots of the world’s greatest cultural locations to Arthurian captures of historical wonders cloaked in other-worldly mists.”

Claudia Kenyatta, Director of Regions at Historic England said: “We are so impressed by the record number of entries that have been submitted this year and the level of quality and skill involved in showcasing our historic environment. It was a joy to go through all of the photographs submitted, from incredible industrial landscapes through to stunning aerial shots. Historic England is once again proud to be a partner of the Historic Photographer of the Year competition and we are delighted to see the diversity of England’s most magnificent historic places and scenery captured on camera.”…