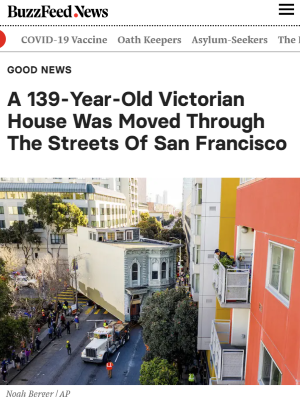 [spectator commented]…’ What if it topples?’…

A 139-year-old Victorian house was moved in one piece through the streets of San Francisco to its new home Sunday.

The 5,170-square-foot house, known as the Englander House, was relocated from its original address at 807 Franklin St. to 635 Fulton St., just a few blocks away.

The move turned into something like a parade, with fascinated onlookers coming out to watch a truck slowly and carefully pull the historic house through the streets of the city.

“It’s the most excitement I’ve had in 10 years. What if it topples?” one spectator, Camilla Blomqvist, told the San Francisco Chronicle.

The house is owned by San Francisco resident Tim Brown, who bought it in 2013 with plans to fix it up after it fell into disrepair, according to Hoodline. The house, as well as the old mortuary it will now sit beside, will be combined and turned into a 17-unit apartment building, SF Gate reported, and a 47-unit apartment complex will be built on the lot where the house previously sat.