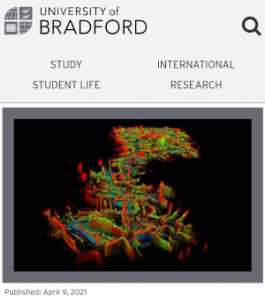 Work is underway on an ambitious project to virtually ‘clone’ Bradford city centre, as a ‘Digital twin’ will open the door to a 3D world with virtually endless possibilities.

…‘brick for brick’ hi-resolution copy of the city centre…

… transform how people interact with the city…

Virtual Bradford will create a ‘brick for brick’ hi-resolution copy of the city centre, with potential to expand the area in the future.

The project is a collaboration between the University of Bradford and Bradford Council and is part of the EU funded SCORE project, which aims to improve public service through smart open-data solutions.

Virtual Bradford will revolutionise how the council deals with planning, air pollution and traffic management but will also enable a myriad of other potential uses, such as creation of heritage trails and mapping cultural assets in 3D.

But it will also transform how people interact with the city – businesses could open virtual shops, allowing customers to browse virtual aisles, artists could install virtual exhibitions and heritage trails could be created throughout the city.

The online clone will include most of the city centre but the virtual landscape will be expanded in future. It is anticipated that data from 100km of streets will be captured to make the first model.

The project is due to be outlined at the forthcoming UNIfy Festival on April 16.

Professor Andrew Wilson, from the School of Archaeology and Forensic Sciences, said: “This is essentially a 3D model or digital twin of the city, capable of showing accurate levels of detail for the built environment.

“The benefit of ‘Virtual Bradford’ will be to support various strategic priorities for the council, including urban civic planning, improve traffic management, support the modelling of air quality, flood risk and noise pollution, and to highlight the heritage of the city and its benefit to enhancing education, tourism and in fostering civic pride.”

A trike and a drone

Academics from the University will use an electric trike, upon which they have mounted hi-tech laser scanners. They will also take 360-degree images from ground level and use a drone to capture the city’s skyline.

It is envisaged the virtual online model will be open source (or copyright free), meaning anyone can use it. It is hoped the project will be near completion by the end of the year.

Professor Chris Gaffney explained some of the background to Virtual Bradford: “We come from a heritage background and our Visualising Heritage team has spent a lot of time surveying prestigious monuments and landscapes around the world, including UNESCO World Heritage Sites that have been damaged or destroyed, such as Palmyra in Syria and Kathmandu in Nepal. We realised a lot of the techniques were just as relevant to Bradford.

“Part of this is about recording the historic buildings of Bradford but it’s also about how people interact with them. This is a very novel idea and the really exciting thing is all the uses that could come from this.

“It’s about creating something very complex, that will be very simple to use. It will enable all kinds of modelling to take place. The possibilities beyond the creation of the model are vast.”

Syd Simpson is Flood Risk and Mapping officer at Bradford Council and one who is closely involved in the project. The former land surveyor said: “This concept of a virtual digital twin of a city goes back quite a few years but the ability to create one has been limited by the expense of the technology. For a long time, it was too expensive for a local authority to build something like this. As the years have gone by, it has become cheaper and easier to do these things.

“We had an opportunity through the SCORE project, which is really where the seed of this has come from – it has enabled us to commission this work and the University won the tender.

“This model will be freely available for people to use – anyone can take it and use it in their designs. A games manufacturer could take it and put the software in place to create something interactive, for example.”

Cartographer Adrian Walker, who is Transformational Services Manager at the council, said: “The uses are limitless. ‘Gamification’ is certainly one possibility. It could be you have all the heritage buildings across the city and a walk which takes in all those buildings. You could have virtual shops so people could go ‘virtual’ shopping and pick items from shelves. That’s something a large retailer might want to look at.”

Associate Professor Martin Brynskov from Aarhus University, Denmark, who is Chair of Open & Agile Smart Cities (OASC), and who will be representing the SCORE project, will be speaking at the Virtual Bradford UNIfy event and discussing the concept of the ‘digital twinning’ of cities.

According to the OASC website: “Digital Twins make it possible to design and test city operations virtually before changing the real city environment. This type of policy-supporting instrument helps to make complex urban issues more comprehensible. Digital twins are suitable instruments for co-creation and decision-making in the collaboration within government institutions and in the coordination with its partners, but it also contributes to improving citizen engagement.”