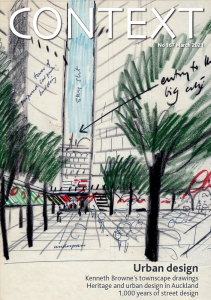 The latest issue (no. 167) of the IHBC’s membership journal Context is now out, boasting a tight focus on Urban Design, with a distinctly  international take.

… complemented by the usual regular features…

As ever, content is complemented by the usual regular features such as book reviews, reports from the IHBC Chair and Director and much more, while

… articles that highlight ways of thinking…

When the IHBC was looking for a name of its journal, it chose the term that sums up what urban design is about: Context. Building conservationists ask about a historic building what urban designers ask about a place: What do we value in it? How can it change in ways that will protect that value and create new value? This issue of Context presents some articles that highlight ways of thinking about those questions.

First, a definition. Urban design is the process of planning for land use and of devising the physical form of development in cities, towns and villages. You might ask: is that not equally a definition of town planning? Yes, it is, if the planning process in question focuses on the physical form of development, rather than on the uses alone. But too often planning lacks that dimension, which is why urban design emerged as a distinct field of activity.

There are two things wrong with the term ‘urban design’. The first is the word ‘urban’. It makes people think of development in towns and cities, whereas urban design is concerned with settlements of all sizes, including villages and rural settings. The second thing wrong with the term urban design is the word ‘design’. It makes many people think of what architects and landscape architects do, rather than the much wider range of skills and activities involved in making places.

If urban design is such a problematic term, why use it? The answer is that, first, it has become an established use, at least in a professional context. The more familiar the term becomes, the less people are likely to agonise about the meaning of its two component words. It is true that the term might be misleading to people outside the professional world who are unfamiliar with it, but none of the alternatives is less confusing. Some alternatives have been tried. ‘Placemaking’, for example, has been fairly widely used as an alternative to ‘urban design’, but recently its association with controversial schemes to redevelop council housing estates has led to it acquiring negative connotations. The term urban design has never lost its innocence in that way and it is a convenient term to use for a professional audience. There is no simple, abstract term that will convey to lay people what this complex subject involves.

… key to success is understanding context…

Urban designers analyse places, write policies and guidance, draw up master plans and design codes, review the quality of building proposals, and design development schemes and spaces, among much else, working at every scale from a region to a single building. A key to success is understanding context – which is nearly always, to a greater or lesser extent, a historic context. No wonder historic building conservationists and urban designers are such close bedfellows.

Themed articles in Issue 167 include:

Other pieces  include regular and new features with focussed more on the IHBC, such as :