IHBC features ‘Heritage from the doorstep’: Remains of ‘high-status’ Roman villa and bath-house beneath building site in Scarborough 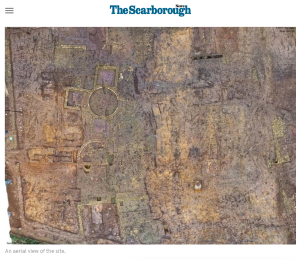 One of the most stunning Roman finds ever unearthed in Britain has been discovered on the site of a new housing development in a village near Scarborough, reports the Scarborough News.

An excavation was carried out at the Keepmoat Homes site in Eastfield after Historic England suggested there was the potential for Roman or Iron Age remains to be found there – but the extent and significance of the discovery has astonished those working on the dig.

A large complex of buildings was revealed, including a circular central room with a number of other rooms and a bath-house leading from it. Experts believe they are the foundations of a ‘high-status’ Roman villa, some sort of religious community or perhaps a combination of both.

This type of villa layout has never previously been found in Britain and it could even be the first example to be uncovered in the whole of the old Roman Empire.

Developers Keepmoat have now amended their plans for the site to preserve the remains, and houses will no longer be built over them. The area will instead be designated as public open space.

Historic England also intend to apply for Scheduled Ancient Monument status for the site, and will fund further archaeological work and analysis.

Inspector of ancient monuments Keith Emerick said: “These archaeological remains are a fantastic find and are far more than we ever dreamed of discovering at this site. They are already giving us a better knowledge and understanding of Roman Britain. We are grateful to Keepmoat Homes for

their sensitive and professional approach to helping ensure the future conservation of this important historical site.”

Corporate director for business and environmental services at North Yorkshire County Council Karl Battersby, who also advised the developers, added: “This is a remarkable discovery which adds to the story of Roman settlement in North Yorkshire….”