IHBC features ‘heritage from the doorstep’: Carham Hall – historic mansion near Borders – to be torn down 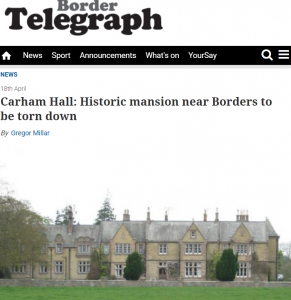 An historic mansion near the Borders, Carham Hall in Northumberland, is set to be demolished writes The Border Telegraph.

… now set to be knocked down in September…

… currently being considered for listing…

Northumberland’s Carham Hall, five miles from Coldstream, occupies the site of a 15th century tower house built to defend against the Border Reivers.

The property was converted into a mansion house in the mid-18th century, before being redeveloped in 1870 into a Neo-Tudor style.

Most recently a care home, Carham Hall is now set to be knocked down in September, with plans having been lodged with Northumberland County Council.

The building is not currently listed meaning its history and heritage face being lost.

Yet a spokesperson from Historic England said: “Carham Hall, Northumberland, is currently being considered for listing.”

This listing may prove the only way to save the property which has great historical significance to the local area.

The Victorian Society, a charity set up to protect Victorian and Edwardian buildings, said: “We are concerned about the loss of Carham Hall, a key local heritage asset.

“The building is currently under threat as the owner plans to demolish the vacant building entirely.

“Sadly, this is permitted development and no permission from the local authority is required.

“The law on permitted development urgently needs reform. In a climate emergency, it is bizarre to demolish a high-quality building and waste all its embodied carbon.

“We urge the owner to think again. If someone would be interested in reusing the building, please get in touch.”

In recent times the house has been the site of a care home, but it has lain empty since the beginning of the coronavirus pandemic in March 2020.

The planning application revealed the £5,000-per-month running costs to be a major factor in the decision to demolish. The application also said significant levels of asbestos had been found.

Conservative councillor Anthony Murray, who represents Wooler, said: “I have looked at all the ways it is possible for the County to object to the demolition but unfortunately none are possible. I am afraid it appears that demolition will go ahead.”

A Northumberland County Council spokesperson said: “As Carham Hall isn’t listed or in a defined Conservation Area, the council was bound by national legislation and could only look at amenity issues in terms of demolition such as potential levels of noise and dust.

“It has no powers to prevent a developer from demolishing the building.”