IHBC’s signpost to a future: Warehouses are taking over the Earth! 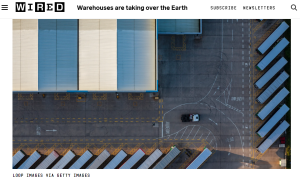 … the ‘golden triangle’ … between Northamptonshire, Tamworth and Nottingham….expanded to 18.5 million, an extra 715 football fields-worth…

If planners have their way, a 40,000 square metre-sized corner of Weekley Hall Wood, part of an ancient forest near Kettering in Northamptonshire, will soon be tarmacked over and replaced with a giant warehouse. The reason? The next-day delivery boom.

E-commerce now accounts for one in every four pounds spent in the retail sector – up nine percentage points since May 2019. But all that stuff has to be stored somewhere before it arrives in cardboard boxes at our door. And that somewhere is the “golden triangle” – a vast patch of land between Northamptonshire, Tamworth and Nottingham.

Logistics companies and online retail giants choose the area because it’s possible to get to more than 90 per cent of the UK population within a four-hour drive of anywhere within the triangle. It’s the reason why Asda was the first company to take up residence in what’s now called Magna Park Lutterworth, a 550-acre logistics park with 771,155 square metres of warehouse space, in the late 1980s. Since then, it’s become one of the main logistics hubs in the UK.

But, as our predilection for online shopping increases, the golden triangle is getting bigger – not just in the density of warehouse space within the area, but also the area itself. “It’s spreading north, it’s spreading south, it’s spreading east, and really it’s more of a diamond now,” says Kevin Mofid of Savills, the real estate agency, who monitors warehouse capacity across the UK. The golden triangle – or diamond – now stretches down to Milton Keynes, as far east as Peterborough, and touches Derby or even south Yorkshire at its northern tip. Yet while the warehouse space scatters further afield, it’s in its core where the biggest changes are happening.

In 2015, the golden triangle was home to 13.4 million square metres of warehouse space, or just over 1,875 football fields. In a report to be released this week, Savills now believe it has expanded to 18.5 million, an extra 715 football fields-worth. And it’ll expand further. Magna Park Lutterworth has planning permission to expand its warehouse capacity 60 per cent from its current size….

Demand has also increased because of several supply shocks in recent years….

And ‘just-in-case’ means more warehouses in an area already blanketed by the hallmarks of the e-commerce boom…. Davies is a realist – “clearly they’ve got to store their stuff somewhere,” he says – but he wants the development to be done in a way that looks after the community and the spaces they use. Northamptonshire can’t simply become a giant logistics parking lot for the rest of the country.