Government commits to ‘nature-positive’ future in response to Dasgupta review 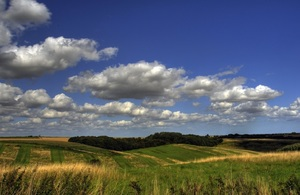 More of the Government’s largest new infrastructure projects must leave nature and biodiversity in an overall better state than before development, it was confirmed, as the Government commits to delivering a ‘nature positive future’.

… committed to delivering a ‘nature positive’ future, in which we leave the environment in a better state than we found it…

Responding to the Dasgupta Review on The Economics of Biodiversity, which was published earlier in the year, the Government agreed with the Review’s central conclusion that nature, and the biodiversity that underpins it, ultimately sustains economies, livelihoods and well-being.

The Government is committed to delivering a ‘nature positive’ future, in which we leave the environment in a better state than we found it, and ensure economic and financial decision-making is geared towards delivering that.

New Nationally Significant Infrastructure Projects in England, such as future transport and energy projects, will as a result need to provide a net gain in biodiversity and habitats for wildlife – through an amendment to be made to the Environment Bill. In parallel, as part of its ambition to be the one of the most environmentally responsible infrastructure projects ever delivered in the UK, HS2 – Europe’s largest infrastructure project – will aim to deliver a net gain in biodiversity on its Crewe-Manchester leg.

The Government has also committed today to ensuring all new UK bilateral aid spending does no harm to nature.

Additionally, building on its ambitious existing nature agenda, and in the run up to COP26, the Review response sets out how the Government will go further, including by:

The Exchequer Secretary to the Treasury, Kemi Badenoch, said:

Protecting and enhancing the natural environment, and the biodiversity that underpins it, is crucial to supporting sustainable, resilient economies, livelihoods and well-being.

The Government has an ambitious nature agenda and our response to the independent Dasgupta Review sets out the ways in which the Government will go further to ensure our economy supports nature and wildlife – from infrastructure at home to bilateral aid spending overseas.

In this crucial year for international action to address biodiversity loss, the UK will continue to ensure the natural environment remains at the top of the international agenda.

If we want to realise the aspiration set out in Professor Dasgupta’s landmark Review to rebalance humanity’s relationship with nature, then we need policies that will both protect and enhance the supply of our natural assets.

This is what lies at the heart of the Government’s 25 Year Environment Plan, and our new measures to embed biodiversity net gain further in the planning system for major infrastructure, through our landmark Environment Bill. It’s also behind our approach to future farming policy and other initiatives such as £3 billion for climate change solutions that restore nature globally and our new due diligence law to clean up our supply chains and help tackle illegal deforestation.

Significant progress is already being made towards delivering a nature positive future, and today’s response builds on a range of action already taken. This includes a new target on species abundance for 2030, aimed at halting species decline, and a commitment to protect 30% of the UK’s land and ocean by 2030 along with encouraging others to do the same, including through the UK’s G7 Presidency where yesterday, the G7 endorsed a Nature Compact to halt and reverse biodiversity loss by 2030

G7 leaders also agreed plans to transform the financing of infrastructure projects in developing countries – the ‘Build Back Better for the World’ plan – bringing together G7 countries under the UK’s presidency to develop an offer for high quality financing for vital infrastructure, from railways in Africa to wind farms in Asia.

In England, the support provided to the agricultural sector is being reoriented to improve the environment, animal health and welfare, and reduce carbon emissions. The government has also committed to spend at least £3 billion of the UK’s International Climate Finance on nature and biodiversity over five years. And the government has set out a Ten Point Plan for a green industrial revolution which will mobilise £12 billion of government investment to create and support up to 250,000 highly-skilled green jobs across the UK.

At the recent G7 Finance Ministers meeting, agreement was also reached to implement and strengthen registries of company beneficial ownership information. This is a major step forward in global efforts to tackle illicit finance and will also boost the UK’s work as G7 President to tackle environmental crimes – like the illegal wildlife trade and illegal logging.