Architect wins battle to save his award-winning project: 15 Clerkenwell Close 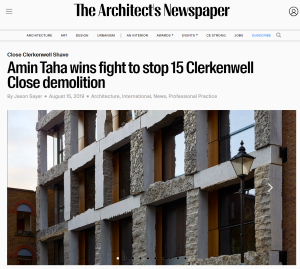 London architect Amin Taha has won his battle against planners to save his award-winning project, 15 Clerkenwell Close, which had faced a demolition order from the London borough of Islington.

…while….there was a ‘difference’ between the architects and planning authorities on what was submitted and approved, the building was in ‘general terms’ not detrimental to the conservation area…

For more than a year Taha has been embroiled in a disagreement over the building’s appearance. In fact, the council had attempted to bring the building down twice before: In 2013, when the building was granted planning permission, a local argued that concrete was being used instead of brick, the facade material that was supposedly initially stipulated. A demolition notice that resulted from a site inspection from an enforcement officer and conservation officer amounted to nothing.

The saga was far from over, though. 2017 saw another demolition notice, this time stating that the building must be rebuilt in brick. Taha disputed this, asking to see the notice report. Again, the notice was withdrawn. A year later, a third demolition notice was issued. “After an investigation, the council has come to the view that the building at 15 Clerkenwell Close does not reflect the building that was granted planning permission and conservation area consent in 2013,” said the council….

Planning inspector Peter Jarratt told the Architects’ Journal in the U.K. that while he agreed there was a “difference” between the architects and planning authorities on what was submitted and approved, the building was in “general terms” not detrimental to the conservation area…..

Despite all this, there is evidence of demolition, or at least that seems to be the case anyway….