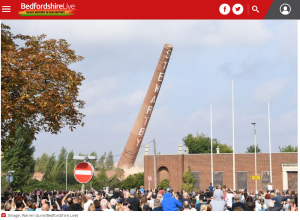 Stewartby Brickworks chimneys, part of what was once the largest brickworks in the world, have been demolished, an act recorded for posterity as reported by BedfordshireLive.

Drone footage shows the amazing view of the towers disappearing from the Bedfordshire landscape as they were demolished in succession.

The demolition took place this afternoon (Sunday, September 26) at the village of Stewartby near Bedford.

The chimneys were demolished due to safety concerns, despite opposition by Historic England.

The iconic landmark overlooked the village of Stewartby for more than 100 years, a remnant of a local industry that once was the largest brickworks in the world.

New homes and buildings will be erected in their stead….

The videographer was legally allowed to be there as the client they had been working for had gained permission.

One by one, the tall structures, which stood up to 70m (230ft), are shown collapsing – a demonstration of the mightiness and the fragility of their construction at the same time.