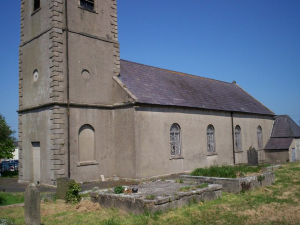 The BBC has featured a joint project in Norther Ireland (NI) – The Village Catalyst – that helps regenerate village buildings that ‘once played a central role in everyday life but now lie vacant’.

… hope to turn the former bank into a cultural centre…

From centres of commerce, faith and entertainment to crumbling reminders of the past. Every village has buildings which once played a central role in everyday life but now lie vacant in a gradual state of decline.

Their prominent location on the Square, Diamond or Main Street now does little for the communities and businesses trying to make their villages as welcoming as possible.

It is thought about 500 historic buildings are at risk in Northern Ireland.

Many will remain that way – but a pilot launched in 2019 aims to restore some of them to the rural community hubs they once were, while tackling rural poverty and social isolation.

The Village Catalyst is a joint project between the Department for Communities, Department of Agriculture, Environment and Rural Affairs, the Housing Executive and the Architectural Heritage Fund.

It has so far funded the rejuvenation of four buildings: the Pat Murphy House in Ederney, County Fermanagh, Gracehill’s old post office in County Antrim, The Woolstore in Caledon, County Tyrone, and the former Bank of Ireland in Rathfriland, County Down.

‘We haven’t had a cinema in 50 years’
Andy Peters of Rathfriland and District Regeneration Group, where the project is ongoing, said it will bring back facilities the village has gone without for decades.

“We hope to turn the former bank into a cultural centre where we will be able to host musical events, we’ll be able to create and run a drama group and also host a pop-up cinema – we haven’t had a cinema here in 50 years.

“Upstairs we are going to have four flats which will help create footfall in the square.” ….

One of the new projects is the former Church of Ireland in Hilltown.

“This building was the founding of the village 250 years ago.

“It closed in the late 1980s, so our group is focusing on the restoration of the building to make it a social space….”