IHBC’s ‘Heritage from the doorstep’: Unearthing the history of Gloucester’s the Fleece Hotel starts 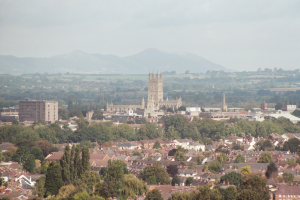 Work to repair a fire-hit medieval hotel in Gloucester is underway as crews have started work to strip back some of the modern trappings and reveal the historic framework reports Gloucestershire Live.

The at-risk building is being repaired as part of a £3.9million project involving Historic England and Gloucester City Council. It suffered huge damage when arsonist Jamie Hiam set it on fire in July 2017 but will be making a comeback soon.

The top two floors of the building perished in the blaze and most of the roof had also suffered as a result. Although it had been derelict since 2011, it had stood in Gloucester city centre for centuries and was known as a resting place for pilgrims visiting the Cathedral.

The Fleece is a 15th-century timber-framed building with later additions including an 18th-century frontage. It is built over a stone undercroft dating to the late 1100s, an early surviving example of its type.

Now the building is on Historic England’s Heritage at Risk Register. The Fleece is being prepared for major conservation works as part of Gloucester’s Cathedral Quarter High Street Heritage Action Zone (HAZ).

Repairs are also under way a few doors up at number 14 Westgate Street, formerly Meeks Shoes shop, a Grade II* listed building which has a fine 17th-century plasterwork ceiling…