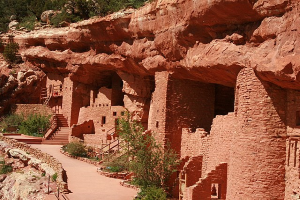 … reassembled into an entirely different style of Ancestral Puebloan architecture…

The scheme was simple: Dig up and dismantle the pueblo into piles of sandstone masonry, use oxen to haul it to the railroad in nearby Dolores, Colorado, and load it onto 40 or so narrow-gauge cars that would travel over 300 miles across the Rockies to Manitou Springs, a small resort town at the base of Pikes Peak. There, it would be reassembled into an entirely different style of Ancestral Puebloan architecture — cliff dwellings, rather than the freestanding pueblo that towered above the Montezuma Valley. The reimagined structure would make a terrific tourist attraction; people would pay about $1 a person to see it, a handsome sum in 1907.

William S. Crosby of Manitou Springs and Harold Ashenhurst of Texas may have come up with the idea, but it took the influence and political experience of Virginia McClurg — one of the original preservationists behind Mesa Verde National Park, which was less than a year old — to make it happen. Her involvement was scandalous; her life’s work had been to stop the looting of archaeological sites, but here she was, endorsing a plan to relocate an entire pueblo in the name of preservation…