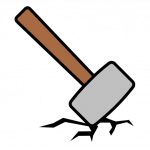 Proposals to demolish an ‘iconic’ house have caused a backlash among locals who insisted it should be preserved, reports North Wales Daily Post.

The demolition of an “iconic” art deco house has got underway amid plans to build five apartments in its place. A request to make the art deco house in Rhos on Sea a listed building was rejected last year.

The plans to knock down the 1930s property sparked outrage among some residents as well public figures such as Baroness Joan Bakewell and comedian Griff Rhys Jones who both spoke out ahead of the planned demolition. It was initially thought the house was designed by Sidney Colwyn Foulkes, known for his iconic architecture around the area, but Cadw said it was more likely that it was designed by a local builder… William Evans.

Images captured demolition contractors already on site preparing the internal work required as glass windows are removed ready for the full demolition of the building….