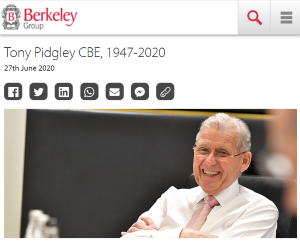 “It is with the greatest sadness that we confirm the sudden death of Tony Pidgley. On behalf of everyone at Berkeley, I have extended our deepest sympathies to his wife Sarah and the children.”

“Tony was a brilliant man who I have been fortunate to work closely with for 20 years. He started by building one house and his vision grew Berkeley into a FTSE 100 company. He knew he would never retire so he ensured that his culture was embedded in the Company for when this sad day came.”

“Berkeley and I owe Tony a huge debt. With my team I will ensure this debt is honoured by continuing to position Berkeley as the leading place-maker and ensuring it continues to be a company of which he would be proud.”

“It has been an immense privilege to work with Tony. Tony created a unique company with a strong management team that has been led by Rob Perrins since 2009. Under Rob’s leadership, Tony’s values of ambition and quality will ensure the business continues to flourish.”

Admired, feared and respected in equal measure, the industry has lost one of its greats, writes Joey Gardiner

Until his untimely death last Friday, there was little question that Tony Pidgley, chairman and founder of Berkeley Group, was the biggest figure in UK housing.

The last remaining ‘owner-driver’ of a listed UK housebuilder, Pidgley – known by most in the industry simply as Pidge – stood head and shoulders above the rest of the industry in the depth of admiration, affection and respect with which he was held.