Historic Houses on 70th Anniversary of the Gowers Report 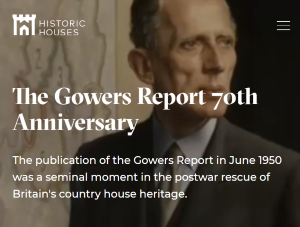 The publication of the Gowers Report in June 1950 was a seminal moment in the postwar rescue of Britain’s country house heritage, and Historic Houses celebrates its legacy.

Seventy years ago, on 23rd June 1950, a government-appointed committee published a report into the future of Britain’s country house heritage. The report is not as well known as the other achievements of the 1945-51 Labour government, such as the creation of the National Health Service or the formation of National Parks. Yet the findings of the report were to have a profound influence on the policies of successive postwar governments towards the conservation of the country’s most significant buildings, landscapes and collections.

Here, we celebrate this landmark moment for Britain’s historic houses, recounting the history and legacy of the report with videos, extracts and links to further articles and information at a time when, in the face of Covid-19, Britain’s heritage is again in need of support to ensure its survival for generations to come.

THE FALL OF EASTON HALL AND THE IMPORTANCE OF THE GOWERS REPORT
The Gowers Report came too late for many of Britain’s country houses. The requisition of many of them as schools, hospitals and military barracks during the war left house owners with colossal repair bills that simply could not be re-paid, leading many to make the heartbreaking decision to pull down the house altogether. Easton Hall was an example of this, and in the video below you’ll learn what might have been for many others had the Gowers Report not been commissioned.