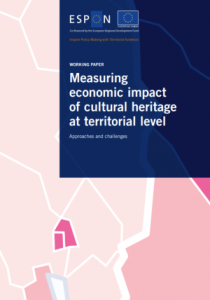 The European Spatial Planning Observation Network (EPSON) reports on research into the European Year of Cultural Heritage 2018, which shows that over 23000 events were organised, reaching more than 12.8 million participants, ‘demonstrating the potential impact that cultural heritage can have on economic development and people’s quality of life.’

The landmark study “Cultural Heritage Counts for Europe” (2015) (2) shows that an estimated 300 000 people work directly in the cultural heritage sector in the European Union (EU) and as many as 7.8 million jobs are created indirectly by the sector. However, there is still a limited understanding of what economic benefits cultural heritage brings to regions and cities.

This working paper is guided by the following questions:

This working paper is mostly based on the results and evidence from the ESPON 2020 Targeted Analysis project “Material Cultural Heritage as a Strategic Territorial Development Resource: Mapping Impacts through a Set of Common European Socio-economic Indicators” (ESPON HERITAGE) and the ESPON 2006 project “The Role and Spatial Effects of Cultural Heritage and Identity”…