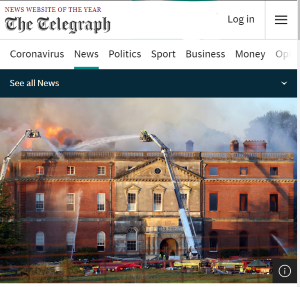 The National Trust’s Clandon Park, near Guildford, attracted more than 50,000 visitors a year before a catastrophic blaze in April 2015 caused by a fault, and now the Trust is suing a construction company and a firm of building surveyors for £115m in damages over a defective lift shaft blamed for the disastrous fire that gutted one of the charity’s most prestigious properties.

….Grade I listed Clandon Park, near Guildford in Surrey, was the ancestral home of the Onslow family until it was given to the National Trust in 1956.

The stately home featured in the 2008 film The Duchess, starring Keira Knightley and Ralph Fiennes, and attracted more than 50,000 visitors a year.

But the 18th century Palladian mansion suffered a catastrophic fire in April 2015, caused by a faulty electrical board in the basement.

Surrey Fire and Rescue Service’s report into the fire stated: “It is believed that the rapid fire spread observed at this incident occurred when the fire quickly reached the lift shaft allowing the smoke and fire to rapidly spread to each floor of the building and into the roof space.”

The stately home was left in ruins with most of its contents, including hundreds of works of art, destroyed.

Five years on, the National Trust has lodged a claim in the High Court against building firm Cuffe pie and property consultancy Tuffin Ferraby Taylor (TFT). “Owing to the unique nature of the property, and the highly sensitive nature of the restoration work that will be required, its losses have not yet been fully quantified, but the Claimant estimates that they will exceed £115 million;’ according to the claim.

It contends that the construction company built a defective lift shaft which did not offer any protection against fire – allowing the blaze to swiftly spread throughout the building with devastating effects…..