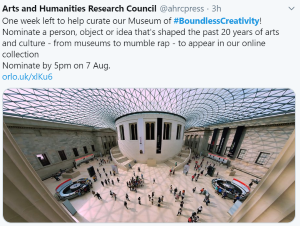 People across the UK are today being asked by the UKRI Arts and Humanities Research Council (AHRC) to help create the first ever collection of a new temporary digital-only museum that will celebrate the UK’s highly successful cultural and creative industries, and culture and creativity more broadly, with nominations closing 7 August.

From iPods and Netflix, to Stormzy and free access to museums and galleries, the Museum of Boundless Creativity, which will open its digital doors in September, is all about celebrating the ideas, people and objects that have shaped the first twenty years of the 21st century.

Nominations for the Museum (up to 150 words) need to be submitted by 1700 on Friday 28 August. A panel of curatorial experts will then select the first twenty items that will help launch the online collection in September.

The new digital-only Museum is part of the Boundless Creativity campaign which is demonstrating the importance of AHRC research to the cultural and creative industries during coronavirus, and making sure the impact of that research reaches a wider public.

AHRC Executive Chair, Professor Andrew Thompson, said, “Books, music, films and TV have all played such an important role in helping many of us get through lockdown, providing a distraction or comfort to the challenges of a new way of living.

“We want the public to have their say and help us create a new temporary digital-only Museum of Boundless Creativity; celebrating the people, ideas and objects from the last twenty years that exemplify our creativity and have shaped our cultural lives.”

Leading figures from across the cultural and creative sectors have made their case for the exhibits that they would like to see added to the Museum.

Lord Chris Smith, former Secretary of State for Culture, Media and Sport who set up the task force that defined the creative industries has nominated free admission to museums and galleries:

As Secretary of State, I had long felt that the great national museums and their collections were the storehouses of our art and culture and science and history and the things of beauty that we had cherished through the centuries. They were how we reached out to explore our sense of identity as a community and as a nation. And there should be no barrier of income or affordability to prevent anyone from visiting and having that experience. So, I was immensely proud to bring in free admission. The Science Museum invited me to cut a ribbon and throw open the doors on the morning they went free. And half an hour later I was wandering through the foyer of the museum, and a young man carrying his little daughter on his shoulders made a bee-line towards me, and as he approached, he turned to his daughter and said “I want you to say thank you to this man; it’s because of him we’re able to be here today”. That I think was the moment when I realised that a career in public life had been worth it after all.

The cultural and creative industries have played such an important role in enhancing our well-being and have become a vital part of the UK economy, boosting our international reputation.

Research has been at the heart of this rapid expansion in the last two decades and the AHRC’s flagship Creative Industries Clusters Programme, is all about finding the new products, services and start-up companies that will support the sector through this decade and beyond.

BBC/AHRC New Generation Thinker, Professor Shahidha Bari, from London College of Fashion, University of the Arts London, said, “In this moment of crisis, so many of us have turned to the arts – whether it’s virtual museum tours, theatre streamed online, or actors reciting our favourite poems on social media! It’s reminded us of the role that creative industries play in our shared culture. And sharing ideas and experiences seem even more important in a time of isolation like this.”

Members of the public can nominate their suggestions for the collection via the AHRC website and share their thoughts on social media using the hashtag #BoundlessCreativity.