IHBC’s ‘Out of Context’ CPD boost from Ireland: The evolution of Ireland’s Architectural Conservation Officer (ACO) 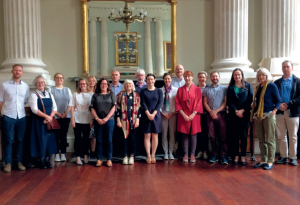 If you have a personal development plan to complete, or a upcoming work review meeting it could be useful to see what others in similar roles to you carry out, and Issue 163 of the institute’s member journal Context, should help as Irenie McLoughlin explores the importance of the nation’s ‘Architectural Conservation Officers’ (ACOs), offering also a personal perspective on the role and how it has developed over the past 20 years, including why she has stayed in the job for 19 of them!

A significant change came about with the introduction of architectural conservation officers (ACOs) into local authorities. We worked at the coal face of an industry that was new, helping the public and the planning authorities navigate the legislation. A great deal has changed in 20 years. Although the statutory duties remain the same, ACOs have redefined and widened their role in promoting a positive attitude towards architectural heritage and a better understanding of the importance of the built environment.

The role and function of ACOs have contributed to delivering an understanding of local and national government priorities such as urban regeneration, adaptive reuse of historic buildings and action on climate change, which are all key elements of Irish Government policy. The role of the ACO within a local authority is to assess, advise and to promote the regeneration of historic buildings, towns and villages, helping to protect and enhance the historic environment, although the scope is far more than this. Our ethos and vision are very similar to the IHBC in establishing the highest standards of conservation practice. The architectural conservation officer post was introduced at local authority level in 1999. Today 18 local authorities have ACOs

the value of the association is in supporting each other within the role, and collaborating in bringing about change….

… Colleagues in other local authorities and I found the role very isolating at times, so the Association of Architectural Conservation Officers (AACO) was set up in 2002 to bring together local authority conservation personnel and provide a forum. The AACO allowed an exchange of technical information on principles and best practice between individual members or with institutions, agencies and organisations. To me the value of the association is in supporting each other within the role, and collaborating in bringing about change….

Read the full article and find out more