Denmark’s 300-year-old homes of the future 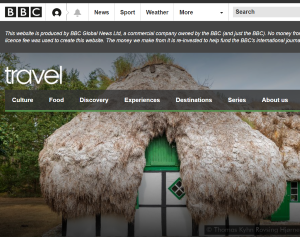 On Læsø, houses are thatched with thick, heavy bundles of silvery seaweed that have the potential to be a contemporary building material around the world.

Most summer days on the Danish island of Læsø, you’ll find Henning Johansen at work. A native islander, Johansen is a thatcher. But on Læsø, a thatcher’s job is unlike anywhere else.

Nineteen kilometres off the north-east coast of Jutland, the island appears in Norse mythology as the home of the giant Ægir, and, surrounded by shipwrecks, is mentioned throughout Danish naval history. Læsø’s most unique characteristic, however, is its houses, which are thatched with thick, heavy bundles of silvery seaweed.

Seaweed thatching began on Læsø in the 17th Century and is largely unique to the island, though seaweed roofs were later reported to have been seen on Scotland’s Orkney Islands. Læsø, which had a thriving saltworks industry, had been deforested – trees were burned to feed the salt kilns – so islanders needed to find an alternative roofing material. The island itself has scant resources and, consisting largely of mud flats and sand banks, is difficult to cultivate, so instead residents looked to the sea.

“People are always surprised because they’re expecting it to smell or be slimy.

Driftwood was salvaged from shipwrecks to be used as timber and abundant eelgrass (zostera marina) was dragged from the shore and harvested for the roofs. By the beginning of the 20th Century, most of the island’s homes were roofed with seaweed. But, after a fungal disease wiped out much of the eelgrass in the 1920s, knowledge of the technique slowly vanished. Today, only 36 seaweed-roofed houses remain on the 1,800-person island.

Since 2012, Johansen has been reviving the technique as he replaces the roofs, the first in a generation to do so. “It’s one of the greatest things in Læsø’s history, so it’s very important for the island… So, of course we are very proud of the heritage.”

Around 40 to 50 women would work on the roofs together…

They could make a roof in one day, said Johansen. For his team of five local thatchers, it takes around 21..

This combination of sustainability and heritage caught the eye of Copenhagen-based American architect Kathryn Larsen, who is currently researching how Læsø’s traditional seaweed thatching could be updated into a sustainable contemporary building material around the world.