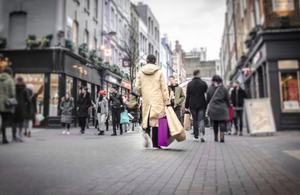 Over a hundred towns in England are to share £80 million to boost regeneration, helping them to build back better, England’s Ministry of Housing, Communities & Local Government (MHCLG) has reported.

Over 100 towns in England will be given up to £1 million to kick start regeneration projects and give areas a boost, Communities Secretary Robert Jenrick has announced today (25 September 2020).

This funding, which ranges from £500,000 up to £1 million per town, will be used to support projects that will make a difference to the area, such as new green spaces, the creation of pop-up businesses spaces, pedestrianising streets to encourage walking or cycling and creating of new community hubs to support those living alone.

Projects such as Burton on Trent’s High Street regeneration, for which the town has been awarded £750,000, will see improvements to make the high street a more pleasant place to visit with new bus access and cycle lanes so the public can more easily visit.

In Newcastle-under-Lyme, the £1 million funding will boost the town’s regeneration plans, helping to demolish unloved buildings to make way for a new chapter in the town’s history.

“Our Towns Fund will help to share prosperity across the country and level-up. This £80 million funding for immediate investment is a real boost for our towns and will help them thrive with investment in transport, technology, skills and culture.

“It will give towns across the opportunity to drive economic growth and improve prospects for their communities, which will be vital as the country respond to the impact of the coronavirus pandemic. We are fully behind our high streets and will support local areas to build back better.”

This investment will give areas in all corners of England the opportunity to drive economic growth and improve prospects for their communities, which will be vital as the country continues to respond to the impact of the coronavirus pandemic. These funds are part of the overall £3.6 billion Towns Fund money allocated – with this initial pot shared out now to get some projects off the ground and give local areas the boost they need.

All 101 towns selected to work towards a Town Deal were given a funding allocation with proposals submitted to the MCHLG in August, before being reviewed by officials and a final decision made by ministers.

Town Deals build directly on the government’s commitment to decentralising funding and decisions away from Whitehall and investing in the growth of local economies and devolving powers through ambitious City and Growth Deals, providing more than £9 billion of funding to Local Enterprise Partnerships (LEPs) and introducing 8 metro mayors in England.

The government is working with councils and LEPs to create better transport links, more connectivity and world-class education opportunities across the country.

On 27 July 2019 the Prime Minister announced that the £3.6 billion Towns Fund would support an initial 101 town deals across England. See further details of the announcement.

A Town Deal is an agreement in principle between government, the Lead Council and the Town Deal Board. It will set out a vision and strategy for the town, and what each party agrees to do to achieve this vision.

See the 101 places being supported to develop Town Deals.