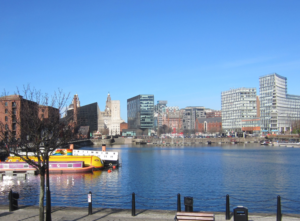 Liverpool Mayor Joe Anderson has made a dramatic intervention into the zip wire row which has divided people, politicians and businesses in the city.

…project has divided opinion in Liverpool…

Liverpool Mayor Joe Anderson is blocking a £5m plan for a zip wire from the top of St Johns Beacon and the city’s Central Library.

Earlier in the summer, Zip Work secured planning permission from Liverpool City Council for the 400 metre-long, 450 ft-high attraction and, when it opens next year, it will create 30 new jobs.

The project has divided opinion in Liverpool with businesses and residents both for an against the idea. Objectors say the it is not appropriate for the wire to carry thrill-seekers above St John’s Gardens at the back of St George’s Hall.

However, in a dramatic intervention, LBN understands Mayor Joe Anderson has told Zip World that it can no longer use the roof of the Central Library as a landing point for the zip wire’s thrill-seekers.

In a statement, the Mayor said: “The planning committee is an independent group of councillors who have a quasi judicial role looking at the lawful application made by this company to operate a zip wire in this vicinity.

“The Committee agreed the planning officer’s recommendation and acted fairly and democratically in granting this application, despite what objectors say. As Mayor I do not interfere in the planning process. However, I do have the final decision on whether a building owned by the council should be used in such a way…..

….“I would like to thank Zip World for their co-operation and look forward to them working with us. Liverpool will always try and support imaginative ideas, especially those that can help us support businesses in difficult economic times.”

Sean Taylor, founder and president of Zip World, has admitted the decision is a “setback” but has vowed to come forward with a revised plan….

Last month Zip World, which runs a similar attraction in North Wales, attempted to appease those against the scheme by changing the location of the ‘kit-up’ centre from the library to St Johns Shopping Centre instead of the library….