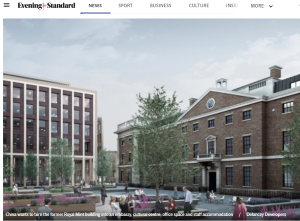 China’s ambassador to the UK Liu Xiaoming has written to the mayor of Tower Hamlets John Biggs to say he believes councillors are ‘attempting to disrupt’ the new embassy.

A row has erupted out over China’s plans to build its largest European embassy in east London as the first consultations on the project begin.

China sent letters to Wapping residents over the weekend explaining its plans for the embassy, cultural centre, office space and staff accommodation on the former Royal Mint site.

However, China’s ambassador to the UK Liu Xiaoming has written to the mayor of Tower Hamlets John Biggs to say he believes councillors are “attempting to disrupt” the new embassy.

He expressed his “grave concern” over a motion due to be discussed at a full council meeting tonight regarding the Chinese treatment of Uighur Muslims in Xinjiang and new laws in Hong Kong.

The motion, proposed by Liberal Democrat councillor Rabina Khan and Conservative Peter Golds, asks that the council publicly raise its opposition of Muslim prisoners with the UK and Chinese Governments.

In his letter Mr Xiaoming wrote: “I have noticed that recently, a few Tower Hamlets are attempting to disrupt the new Chinese Embassy project under the excuse of Xinjiang and Hong Kong related issues.”

He adds that the reports of Muslims being detained in camps, forced into labour and banned from practicing their religion in the country are “all lies fabricated by a few irresponsible politicians and media from the West”.

China bought the Royal Mint for £250 million in 2018. The site sits towards the end of Cable Street, which has been a symbol of anti-racism after East End residents halted a march of fascists through Stepney in 1936.

China’s crackdown on Hong Kong and its reported persecution of Uighur Muslims has led to opposition to the embassy in Tower Hamlets, which has one of the largest Muslim populations in the UK.

Ms Khan said it was important the motion was heard at full council and Mr Xiaoming’s letter was publicly published.

She added said: “We must call out the contents of the letters from the Chinese Embassy and set the record straight. East Enders will not stand by and let this issue pass just as those who have lived here before us stood firm in Cable Street.”

Mr Biggs said: ‘’We are an open and tolerant place here in the East End. And we want to be good partners and support good relationships.

“But I and many in our community are very concerned about China’s human rights record on a number of issues, and currently in particular the appalling treatment of the largely Muslim Uighurs.

“It’s right that the Chinese government are challenged on this and that we should do what we can to raise this issue and put pressure on the Chinese Government on matters of international law and human rights.’’

A council spokesman added: “The redevelopment of the historic former Royal Mint site is important for Tower Hamlets as well as the rest of the country.”