CIAT updates members on IHBC research into England’s LA Conservation Capacity:  50% fall in a decade, with 6% with none! 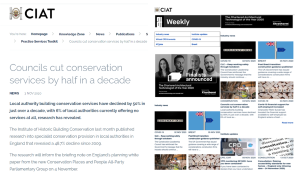 CIAT has reported to its members and networks the IHBC’s recent research into current Local Authority (LA) conservation service capacity in England, which has declined by 50% in just over a decade, and today suggests 6% of local authorities currently offer no services at all!

…conservation provision in local authorities in England that revealed a 48.7% decline since 2009….

Councils cut conservation services by half in a decade.

Local authority building conservation services have declined by 50% in just over a decade, with 6% of local authorities currently offering no services at all, research has revealed.

The Institute of Historic Building Conservation last month published research into specialist conservation provision in local authorities in England that revealed a 48.7% decline since 2009.

The research will inform the briefing note on England’s planning white paper from the new Conservation Places and People All-Party Parliamentary Group on 4 November.

IHBC Chair David McDonald said: ‘This survey demonstrates just how much local authority conservation services in England have been reduced over the last decade. Access to specialist advice decreasing by almost 50% since 2009 is a statistic that speaks for itself. If we add to that the loss of senior staff and the consequent wealth of knowledge and experience that is no longer available the overall picture is even worse.’

‘Of similar concern are those authorities that do not have access to any conservation advice. Not only are they failing in providing an adequate service, but also there must be an increased risk of Ombudsman complaints or Judicial Reviews.’