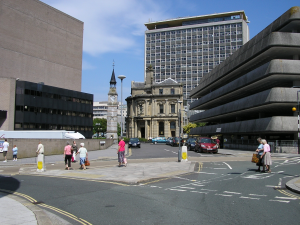 Towns and cities across Devon and Cornwall are celebrating after being awarded millions of pounds to transform their town centres, as Plymouth, along with Paignton, Newton Abbot, Barnstaple and Penzance have received confirmation of the success of their bids from the Future High Streets and Towns Fund.

… Grade II Listed Plymouth Guildhall is one of the few survivors from the pre-war city centre….

…Royal Parade will be reactivated and will join up the Royal Theatre, Civic and Guildhall…

…A further £12m for Plymouth has been awarded.

The funding is provisional, but to secure the funding, the councils now have to work with Government to agree the final schemes by the end of February.

The city council, Urban Splash and the University of Plymouth have joined forces to create the plans under the city council’s Resurgam recovery project. The aim is to attract more people to live and work in the area, and develop events to bring in visitors.

The will refurbish the rundown Grade II listed Civic Centre building, introducing a truly innovative and flexible residential model that will bring pioneering people of all ages to live in the city centre. It will create high value uses with economic and social value and host event and conference uses with high footfall that will in turn support retail and hospitality.

The plans will reanimate the Civic Square and will create permeability and street level animation within the Civic Centre and create a combined and curated offer along the Royal Parade ‘south bank’ between Guildhall and Theatre Royal.

The Grade II Listed Plymouth Guildhall is one of the few survivors from the pre-war city centre, heavily bomb damaged and restored as part of the post-war plan. This plan will bring the Guildhall up to the rising standards now required for high footfall events and by bringing this forward as part of a suite of facilities and spaces, it will deliver the maximum range and flexibility and enhanced capacity across the Guildhall, Civic and wider city events and conference offer.

Royal Parade will be reactivated and will join up the Royal Theatre, Civic and Guildhall in an animated strip offering culture, leisure and conference uses along a pedestrianised ‘south bank’.