IHBC features ‘Heritage from the doorstep’: Gang members jailed after £2M lead thefts from churches in Lincolnshire and beyond 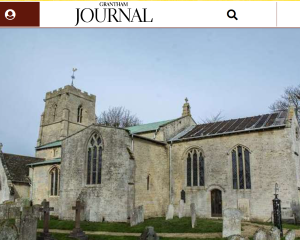 A prolific gang stripped the lead from dozens of rural churches across England, including Billingborough and Normanton – causing utter devastation to village communities – reports The Grantham Journal, as part of a two-year crime spree that left churches with bills of more than £2M.

… community [described] as being in ‘profound shock’…

… Each theft required significant planning….harm was high…. [because of] impact on the local and wider community …

The counties hardest hit by the crime spree were Lincolnshire, Somerset, Cambridgeshire and Yorkshire.

The gang, who all lived in the West Midlands, were arrested in March 2020….

The attacked buildings were of huge religious and historic significance to the local community and to the country generally.”

The damage to one church, the 14th Century St Bartholomew’s at Covenham St Bartholomew was valued at £250,000 and the other targeted churches all suffered significant damage with the loss of the lead causing water ingress which damaged the inside of the buildings.

Other churches in Lincolnshire that were targeted included St Nicholas at Normanton, St Lawrence at Tallington, St Mary and St Nicholas at Wrangle, St Andrew’s at Billingborough and St Swithin’s at Baumber.

The damage caused to St Nicholas Church was estimated to be between £150,000 and £200,000. There was also damage to headstones in the graveyard caused by the lead being thrown to the ground. The court was told that the church had no access to insurance.

The damage to St Swithin’s at Baumber and St Andrew’s Church in the village of Billingborough was also significant.

The Billingborough church minister the Rev Neil Knox described the community as being in “profound shock” at what happened with lunches for the elderly, coffee mornings and village social events all affected.

Mr Cranmer-Brown said that loss of lead damaged not only the church buildings but caused serious problems to the local communities….

Mr Cranmer-Brown said that the churches were targeted after the defendants trawled the internet for potential targets.

They often used hire vehicles many of which had tracking devices which provided evidence for the police as to exactly where they had been.

The lead was rolled up from the roof and thrown onto the ground sometimes damaging gravestones in the churchyard. …

Judge Catarina Sjolin Knight said: “This was an organised, sophisticated and persistent operation which targeted country churches across England for their lead. Each theft required significant planning and team work both to conduct the theft.

“The harm was high because of the heavy consequential financial losses occasioned by the thefts, the impact on the local and wider community and the damage to heritage assets.”