IHBC features ‘Heritage from the doorstep’: Work to save Hurst Castle wall was ‘just days away’ before collapse 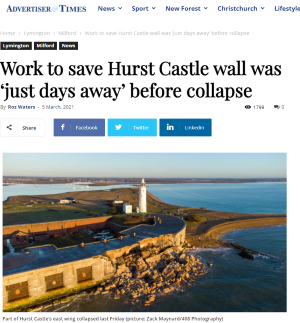 WORK to strengthen Hurst Castle was just days away from starting when a huge section collapsed into the sea, New Forest West MP Sir Desmond Swayne has reported, writes The Advertiser and Times.

… the will and the resources to restore this important historical attraction…

… the castle faces the full force of the wind and waves…

The Advertiser and Times writes:

English Heritage has been accused of being too slow to act on urgent warnings, as reported in January by the A&T, that the historic monument on the coast of Milford was in imminent danger.

But Sir Desmond said he had received assurances that the agency had been “days away” from beginning work to underpin the foundations of the east wing, having undertaken a similar £750,000 scheme to shore up the west wing last year.

He said: “They say that there were no signs of major structural problems and that deterioration had been at a very slow rate until recent storm damage prompted a rapid collapse.

“Clearly, I have not the expertise to make a judgement as to whether English Heritage have been negligent in the face of warnings by volunteers and locals.

“What I’d rather concentrate on now is the will and the resources to restore this important historical attraction, and I am pursuing this.”

Eyewitness Denise Wood, from Lymington, confirmed workers were on site fencing off the southern side of Hurst Castle just hours before the wall crashed down….

In January the A&T revealed sources at the castle had also warned coastal erosion beneath the east wing was leading to “real fears” the whole wall could collapse without immediate action.

A spokesperson for English Heritage confirmed engineers were on site when the incident occurred and inspections have taken place to identify emergency stabilisation works.

English Heritage estates director Rob Woodside said: “This is a devastating blow to a Hampshire icon and for all of us whose life’s work is to protect England’s historic buildings.

“The castle is in an extremely vulnerable position. Located on a shingle spit – itself part of sea defences for the people and places inland – the castle faces the full force of the wind and waves….