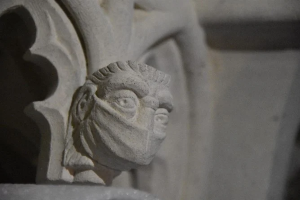 This summer, visitors to St Albans Cathedral Hertfordshire will have the chance to see the medieval shrine of St Amphibalus restored to its former glory, now with ‘a modern addition of a face wearing a face-mask to commemorate the shrine’s restoration project’ in the pandemic!

…Located near to the shrine of St Alban, Britain’s first Saint, it is the first time in centuries that the Cathedral’s two medieval shrines can be appreciated together in their fully restored grandeur.

The shrine of St Amphibalus is one of Britain’s 13 medieval pedestal shrines and St Albans is the only British cathedral to house two. As part of the Cathedral’s landmark Alban, Britain’s First Saint project, funded by The National Lottery Heritage Fund and over one thousand donors, the conservation and restoration project of the shrine of St Amphibalus began in June 2019. It has been completed thanks the generous and valued support of a number of committed donors. Carried out by a team at Skillington Workshop, based in Lincolnshire, specialist conservation of the original pieces took place as well as the creation of hand-carved stone by skilled carvers to replace missing sections, before returning to rebuild the shrine in the Cathedral in 2021.

Amongst the range of carvings, visitors will be able to spot a modern addition of a face wearing a face-mask to commemorate the shrine’s restoration project taking place during the pandemic.

To mark the return of the newly restored shrine of St Amphibalus, we will be launching a brand-new pilgrimage route during the annual Alban Pilgrimage weekend in June. Beginning at the site of the saint’s martyrdom in Redbourn before arriving at the shrine’s new home in the Chapel of the Four Tapers, this new pilgrimage route will be a key feature of our Medieval Summer programme.