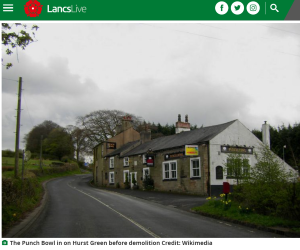 The Punch Bowl Inn in Hurst Green was flattened recently, with Ribble Valley Council saying they are ‘looking into it’.

LancsLive writes:
The shock demolition of a derelict, Grade-II listed pub in the Ribble Valley has prompted the council to investigate it further.

The Punch Bowl Inn, which is on the outskirts of Hurst Green near Longridge, was flattened on Tuesday June 15 with no warning.

The pub has been vacant since 2012 but residents have been left upset and confused as to why the pub with so much history has been flattened to the ground.

Planning appeals for the pub to be converted and modernised started five years ago.

Owners of the pub at the time, Donelan Trading Ltd, appealed for planning permission back in 2016 for a conversion of the former Punch Bowl Inn, into holiday lets and a café. The plans included demolition – but were only approved in 2018.

A heritage statement submitted at the time described the Grade II listed building to be in “a very poor state of repair after suffering vandalism and deterioration associated with vacancy.”

Ribble Valley Borough Council have stated that they will be looking into the demolition of the building….