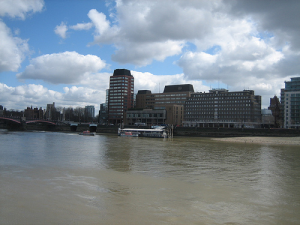 Plans to redevelop the former London Fire Brigade headquarters on Albert Embankment have been vetoed by the Government after a public inquiry, reports London SE1.

… scheme has been opposed by local campaigners…

Developer U + I, in partnership with the London Fire Commissioner (LFC), planned to build 443 flats, a 200–room hotel, to revamp Lambeth Fire Station and build a new home for the London Fire Brigade Museum at 8 Albert Embankment.

The scheme was approved by Lambeth councillors in 2019 but the planning application was later ‘called in’ by communities secretary Robert Jenrick who ordered a public inquiry.

The inquiry took place in November last year and the recommendation of planning inspector David Richards that the scheme be rejected has been endorsed by Government ministers….

The ministerial decision endorses the inspector’s findings that the proposed development – including a rooftop restaurant – would harm the grade II listed fire brigade HQ building facing Albert Embankment, and that the new towers proposed further back from the river would appear in the backdrop of protected views of the Palace of Westminster.

The scheme has been opposed by local campaigners who fought the development under a ‘Stop the Towers’ slogan, arguing it would have an unacceptable impact on daylight and sunlight to nearby homes on the Whitgift Estate.

Residents’ concerns were upheld by the Government, with the decision letter noting that some homes would “experience an unacceptable increase in gloominess” if the scheme were to be built….

The fire brigade recently launched a crowdfunding campaign to raise funds for its new museum.

This is the second time that the fire brigade’s plans to redevelop the site have been blocked….