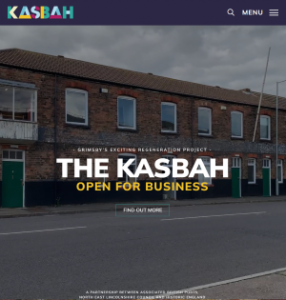 A website has been launched to share vision of new cultural and business quarter at Grimsby’s Kasbah and aims to showcase what the regeneration project has to offer businesses, reports The Grimsby Telegraph.

A new website has been launched for an ambitious project to turn part of Grimsby’s port into a cultural and business quarter – with the message that it is “open for business”.

The site aims to showcase what The Kasbah – billed a a “unique opportunity” and “a town within a town” – could offer businesses.

The Kasbah – described by Historic England as the “most important representation of industrial scale fishing in the UK” – was once a thriving port area but went into decline in the 1970s.

Funded by the Digital Confidence Fund, through the National Lottery Heritage Fund, the website includes information about the history, current projects, and future events at the site….

GGIFT is working on the renovation of Peterson’s Smokehouse and the adjacent Fred’s Fish using grants provided by the National Lottery Heritage Fund and the Architectural Heritage Fund”s Transforming Places Through Heritage programme.

Cllr. Callum Procter, Portfolio Holder for Economic Growth, Housing and Tourism in North East Lincolnshire said: “Over the last few years in particular, there’s been a lot of work done to bring people together….

Developed during the 1870’s, the Kasbah – which is said to be named due to the odd-shaped buildings and narrow alley ways slotted around the all-important railway lines of the day – has been described by Historic England as the most important representation of industrial scale fishing in the UK.

Until the 1970s, the whole area was a hive of activity, packed with ship repairers, supply stores, cold stores, cafes, pubs and fish businesses.

During the last half a century, the Kasbah area went into decline until, in October 2017, it was designated a conservation area and included in the 2018-2023 Greater Grimsby Heritage Action Zone.