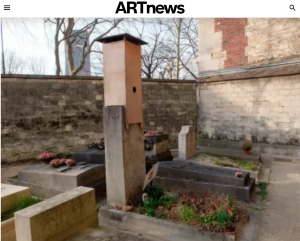 A decades-spanning legal battle over a Constantin Brancusi sculpture that has long been a beloved fixture of Paris’s Montparnasse Cemetery has ended in a win for the French state reports Art News.

… the sculpture, which depicts two abstracted lovers in an embrace, has become one of the most popular attractions…

In July, a French court deemed the marble sculpture, titled The Kiss, a historical monument and integral component of the tombstone it is installed atop, barring its removal from the funeral grounds…. For over a decade, the Russian heirs of the woman buried beneath the gravestone had been seeking permission to export the artwork to Russia.

The new ruling is a rebuke to a decision….by the Administrative Court of Appeal of Paris, which sided in favor of the heirs’ claim. However, when the family went to the grave to claim the sculpture shortly after, the city of Paris refused to allow them to take it to Russia, prompting a return to court.

Commissioned in 1909 for the modest price of two hundred francs by the then-little known Romanian artist, The Kiss was purchased by a Romanian doctor named Solomon Marbais to decorate the grave of his lover Tatiana Rachevskaïa, a Russian student who took her own life. In the century since its creation, the sculpture, which depicts two abstracted lovers in an embrace, has become one of the most popular attractions of the cemetery, drawing thousands of Brancusi admirers a year. In 2018, visitors discovered that the work had been hidden from public view in a mysterious box, leading to the revelation that it was subject to a legal claim.

In fact, the legal fracas began over a decade earlier.