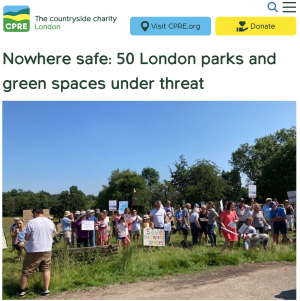 More than 50 London parks and green spaces under threat from privatisation and neglect: even premier league clubs Spurs and West Ham ‘in on the act’, reports The Countryside Charity (CPRE).

… ‘Nothing is safe: all kinds of green space…. are coming under threat…’

Environment campaigners CPRE London have… released a new report Forever Green March 2022 identifying more than fifty parks and green spaces under threat from development in London and, as the local elections approach, they are calling for borough councils to take action.

Alice Roberts, Head of Campaigns at CPRE London said: “Nothing is safe: all kinds of green space – from public parks, including historic and even royal parks, to vast areas of Green Belt, sports pitches, recreation grounds, open fields, nature reserves and green spaces in housing estates – are coming under threat. Many of the sites have protected Green Belt and Metropolitan Open Land status.

“Developers and borough councils are often behind the threats. And even Premier League football clubs Spurs and West Ham are in on the act, looking to profit from deals with councils – Spurs to build a training facility on Whitewebbs Park in Enfield, West Ham to build a new development centre, kicking out grass roots football club Bealonians’ from playing fields in Redbridge.

“This situation is extremely alarming. London only has half the green space it needs for a population its size and the limited green spaces we have are coming under more pressure since the start of the pandemic despite their growing importance. Meanwhile, attacks on Green Belt threaten loss of countryside around London while leaving rundown brownfield sites unused.

“Threats nearly always relate to money one way or another because land is worth much more if it can be developed. This is exacerbated because there is currently no mechanism that provides robust legal protection for parks and open spaces in London.

“The planning system doesn’t seem provide adequate protection anymore either. Despite welcome policies in the London Plan…. and positive action by some Boroughs…., the national reforms in 2012 have opened the system up to greater challenge, so if you can argue that building on a green space is ‘sustainable development’ then that seems to trump all protections. Obviously that is arguable but it just creates a bonanza for lawyers and puts the party able to pay for legal support in the strongest position.

“As a result the protection of London’s green spaces ultimately falls to local communities who are prepared to fight for them. Often they don’t have the necessary expertise or resources. Even so, there are many local groups prepared to campaign – and we, and others like the London Gardens Trust, help them as far as we can.”

“Urgent action is needed to address these growing threats.  We now want all those standing for election to Borough Councils to commit actively to identify green spaces under threat; and positively plan, with local groups, to save those spaces. Where a borough council is actively involved in creating a threat, we are urging them to think again.

“Ultimately, we need effective legal and planning policy protection for our precious green spaces. That may well mean new legislation and changes to the National Planning Policy Framework. Until effective protections are in place – your local park is only as safe as the communities who befriend it and are prepared to fight for it.”