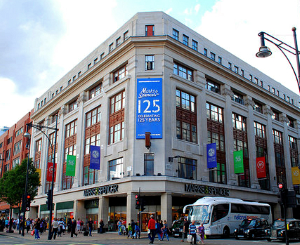 Marks and Spencer’s bosses have attacked Michael Gove for ‘political grandstanding’ after the Housing Secretary called-in the retailer’s plans to demolish and rebuild its flagship store.

image: for illustration purposes only by Gary Rogers / Marks and Spencer, Wikimedia Commons

Plans for a new ten-storey steel and glass office complex on the site have been approved by Westminster City Council and the GLA.

But Gove and his department have now stepped-in after campaigners claimed the building should be refurbished instead because of the amount of embedded carbon it contains.

Sacha Berendji, M&S Group Property, Store Development and Technology Director said: “… we are bewildered and disappointed at Michael Gove’s baseless decision to call in the proposed redevelopment of our Marble Arch site….

“For a government purportedly focussed on the levelling up agenda, calling in this significant investment in one of our most iconic shopping locations will have a chilling affect…”

The future of the site will now be decided following a full public enquiry led by a planning inspector.

See more at SAVE Britain’s Heritage