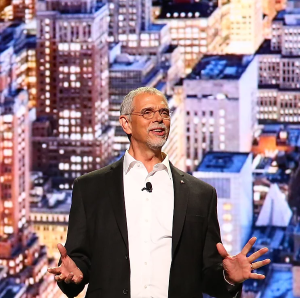 Carl Elefante,  94th President of The American Institute of Architects, will take on environmental issues for the built environment as his 2020 Virtual School topic on 19 June, and to spotlight his work, prospective delegates are encouraged to  review his update from 2015 of his 2007 summary on how ‘The Greenest Building Is… One That Is Already Built’.

Carl Elefante, FAIA, FAPT is Principal Emeritus with Quinn Evans Architects where he served as design principal on architecture, preservation, and community revitalization projects. Known for coining the phrase: ‘The greenest building is one that is already built’, Mr. Elefante writes and lectures nationally on historic preservation and sustainable design topics.

Carl Elefante writes in the Preservation Leadership Forum’s ‘The Greenest Building Is…One That Is Already Built (Update)’ from 2015 (2012 and 2007):

In the five years since the Greenest Building article first appeared, a great deal has changed. While there has been significant progress integrating historic preservation into initiatives promoting green building and sustainable communities, unfortunately the most dramatic development has been unproductive and discouraging. The emerging culture change that I so hopefully pointed to in 2007 has devolved into the culture wars of 2012!

First, the progress: In most quarters, the sustainability community is coming to recognize the importance of existing and historic buildings and to respect the expertise residing in the historic preservation field. The National Trust for Historic Preservation has contributed substantially to this ‘maturing’ relationship.

The Trust has engaged the United States Green Building Council (USGBC) to raise awareness of existing and historic buildings and to modify green building rating systems to more appropriately reflect their value. While this process is arguably still in its infancy, its significance should not be underestimated. The Trust co-sponsored with the National Center for Preservation Training and Technology (NCPTT) the Pocantico Symposium where five principles were articulated to recast historic preservation objectives in sustainability terms. And perhaps most importantly, the Trust’s Preservation Green Lab published its groundbreaking study (The Greenest Building: Quantifying the Value of Building Reuse) that demonstrates in great detail the technical, not just philosophical, truth behind my oft-quoted proposition that the greenest building is one that is already built.

There are many other examples of progress. In university historic preservation programs around the country, students are turning their attention to the inherent green attributes of historic structures. Professional literature on sustainable preservation now fills an entire shelf in my library. (Of particular note is the authoritative volume by Jean Carroon, FAIA: Sustainable Preservation, Greening Historic Buildings.) The National Park Service has appended the Secretary of the Interior’s Standards with the Illustrated Guidelines on Sustainability for Rehabilitating Historic Buildings. And most importantly, the portfolio of successful sustainable preservation projects has multiplied many times over.

However, in 2007 I believed there was growing evidence that a corner had been turned. I saw that as a nation, we were beginning to face the challenges of climate change by seizing the opportunities of sustainability. But instead, over the last five years the United States has entered an era of gridlock and ever more strident proclamations about true American values. Where once political correctness meant navigating the shoals of gender and ethnic sensitivity, today it means denying overwhelming scientific evidence of the human causes of climate change in the name of respecting alternative explanations. Parallels to the decades of debate over the health risks of tobacco are obvious.

If there were no consequences to such willful ignorance, I would simply leave it alone. Unfortunately, the stakes could not be higher, especially for historic resources. While this disingenuous debate rages across the airwaves nationally, at the local level nearly every coastal city struggles to formulate both emergency and long range plans for ‘adaptation’ to the impacts of climate change, impacts that threaten many of the most beloved historic places in the United States of America. There is no way for historic preservation advocates to sidestep the debate. If we truly value our heritage, it is time to defend it against forces that threaten it, even if we offend fraudulent political correctness in the process.

Read more… and see the Update