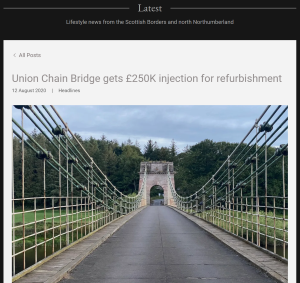 Border Country has reported on how the restoration work the 200-year-old Union Chain Bridge – which spans the England-Scotland border on the River Tweed between Horncliffe and Fishwick – has been given another boost as with a grant of £250,000 from Historic England topping up a £10.5 million refurbishment.

Restoration work being carried out on the 200-year-old Union Chain Bridge has been given another boost.

The oldest suspension bridge in the world still carrying traffic has been granted £250,000 by Historic England to boost a £10.5 million refurbishment due to start this month.

Historic England’s acting regional director Charles Smith said: “The Union Chain Bridge is one of the most majestic and historically important bridges in the north east and Scotland.

“We are proud to be playing a key role in this cross-border restoration project, which will hopefully help secure the bridge’s future for the next 200 years.”

An engineering breakthrough when built by Royal Navy captain Samuel Brown in 1820, the bridge spans the England-Scotland border on the River Tweed between Horncliffe and Fishwick.