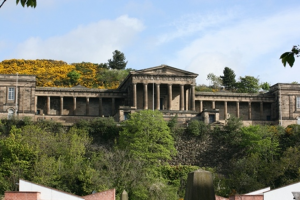 The old Royal High School on Calton Hill has been one of Edinburgh’s most recognisable landmarks for nearly 200 years, reports The Edinburgh News, so the response to the long-awaited ruling from ministers into its proposed £75 million transformation into a hotel was unsurprisingly divided, while its refusal establishes the need for new thinking on uses for sensitive sites.

…symbol of a divided Scottish capital…

But now the building long touted as a potential home for the Scottish Parliament stands as a symbol of a divided Scottish capital. Half a century after it was last in proper use, the old Royal High School on Calton Hill is once again facing an uncertain future after a protracted battle to turn it into a luxury hotel was rejected by its near neighbour, the Scottish Government.

The response to a long-awaited ruling from ministers following a public inquiry into its proposed £75 million transformation was unsurprisingly divided, with the developers behind the project dismayed and baffled, while heritage groups and the backers of a rival scheme to turn it into a new home for a music school totally elated. Meanwhile, the city council, the long-time owner of the building, is still locked into a legal agreement with the hotel developers but under pressure to rip it up to allow the music school development to proceed, and must somehow try to navigate a way forward.

It would be a difficult enough task were opinions not sharply divided on the future of the city centre. Tensions have been building for several years over Edinburgh’s pursuit of hotel developers and year-round tourism, amid growing concern about the city centre’s ability to cope with the numbers flocking during peak periods, declining numbers of local residents in the face of the growth of Airbnb, and the sustainability of being a global tourism destination in the midst of an escalating climate crisis. New hotels have long been seen as a potential saviour of Princes Street in the face of fears that the new St James development…

The scale of the crisis facing the city’s existing hotels was brought into sharp focus this week when a new report revealed that Edinburgh had seen the most dramatic slump in the performance of its hotels of any city in the city, with room rates plummeting by nearly two thirds. News that a planned transformation of the Jenners department store into a hotel had been put on hold is a further body blow. The city council has just instigated a new masterplan for Princes Street and the adjacent ‘Waverley Valley’, to take into account the impact of the climate crisis and the pandemic…

Russell Imrie, spokesman for the Edinburgh Hotels Association, said: ‘The city does not need to change course dramatically as it has been developed over decades to be a destination city… new additional supply should not start until the tourism market recovery has started and stability is returning.’

A new report on post-pandemic Edinburgh, compiled by the heritage group the Cockburn Association states how the ‘dramatic, global impacts’ of the pandemic meant there was a pressing need to ‘reimagine the future of Edinburgh.’ [Cockburn Association] Chair Cliff Hague said: ‘Overtourism was a problem, but once the industry was brought to a halt in the spring it became clear that economic over-reliance on tourism was also a problem…’

However Roddy Smith, chief executive of business group Essential Edinburgh, said: ‘What we have seen in recent months is the reliance on a triumvirate of residents, office workers and visitors coming into the city centre for it to thrive. The investment in the city in recent years has been on the back of growing tourist numbers…’

Neil Gardiner, the council’s planning convener, said: ‘One impact of the coronavirus pandemic is that many of us are now questioning how we live, our priorities and how we’re going about our daily lives. The Waverley Valley Strategy, which is much needed regardless of these changes, is now even more important to help us shape Edinburgh’s unique city centre with its combination of beautiful built heritage, world-famous attractions and retail. We want to make sure we maintain this diversity and vibrancy.’